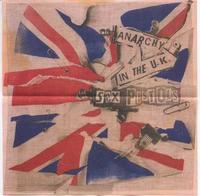 The full title is ‘Punk: Sex, Seditionaries and the Sex Pistols’. This is important. I was expecting more about the whole punk scene but this is really just about ‘the relationships between the Sex Pistols, Malcolm McLaren, Vivenne Westwood and Jamie Reid and the designs, fashion and cultural icons they collectively created.’
There is a section on the Manchester punks, Buzzcocks, Nosebleeds (who?) and John Cooper Clarke. Still well worth seeing, there’s the familiar Reid artworks and Westwood fashion items. Always interesting to see the sketchbooks and hand-written lyrics (some surprisingly neat penmanship by the way). Oh, and the headlines from the likes of The Mirror, outraged by the Pistols use of the ‘f’ word on TV, shock, horror!
I was never into punk music, it passed me by, except when a close neighbour played God Save The Queen at max. volume over and over and over again with his windows open when we were trying to get the children to sleep. Thanks Sid. I did enjoy listening to punk poet Cooper Clarke reciting such classics as ‘Beasley Street’ or ‘I don’t Want to be Nice’ though.
At Urbis, Manchester until Sept 11th 2005

Rock The Future at FACT

Artists Book Fair 2010 at A Foundation

Bill Viola at the Walker

Off Centre Arts Group at CUC