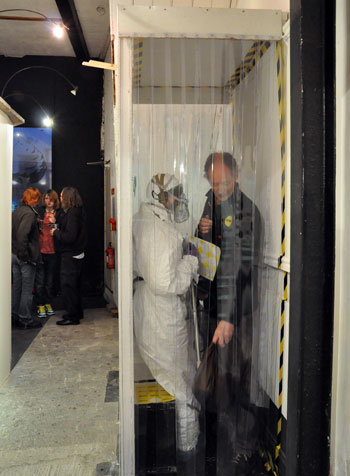 We did a quick tour of some of the SQUAT places on the opening night. We need to revisit some places, especially Phase 5 which houses 4 floors of sound artworks. On entering the International I was scanned with a Geiger counter and despite spending the past 40 years surrounded by powerful computers I was surprised to be declared non-radioactive! Where and what is the (space between)? High Tide‘s contribution to S.Q.U.A.T Liverpool imparts an exploration into the ambiguities and often intangible relationships that we have with the natural world. Brady & Carter, John Davies, Helen Grove White, Philip Jeck, Kultivator, Anne Lydiat, Anna Mendelssohn, David Nash, Janette Porter, Tim Pugh, Elizabeth Willow. A record shop as an art installation, I’m not sure if these are real records or if they’re for sale. On the 1st floor of binarycell is this cute work by Philipp Jordan you can use the simple cursor control to move the bears eyes and alter the sound. You can see more of his work painted on the building opposite the Base2stay hotel further up Seel St. This piece by Ray Lee is difficult to capture on camera, there are several rotating lights with sound, the sequence is triggered by anyone entering the space in the basement. ‘Repairs’ by Juan Cruz. I think you sit on a box and read the text on the one facing you then move onto the next. But I may be wrong. Love this piece by Phil Jeck, vinyl records floating in a pool of water and slowly move around making patterns while others rotate on several adjacent old turntables. One piece I really want to see again is Scherzo by Joe Diebes. The cello player really gives it some welly.

Bailey and Trodden at ArtSpeQ