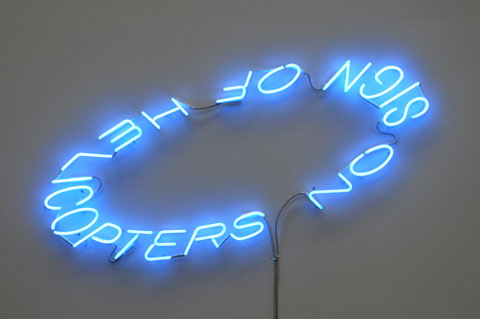 Nick Crowe and Ian Rawlinson ‘No Sign of Helicopters’

For their debut solo exhibition at the Ceri Hand Gallery, which coincides with the Liverpool Biennial, Nick Crowe and Ian Rawlinson present a new body of work exploring issues of containment and release.

This is a show that has a lot more than first meets the eye. Indeed I missed the fact that the Anvil piece actually heats up and makes noises but I did spot that there are life-size mannequins underneath the golden blanket which also emits sounds – the chirping of cicadas, like a sort of camping trip in a collapsed tent. The coils of rope ‘The Hunters’ somehow conjure up all kinds of images in the imagination despite being just coils of rope on a white wall.

The tower or totem of drums is also interesting but my favourite piece is the video ‘Die Brucke’. Filmed at night during the dismantling of a railway bridge in Berlin. It’s an industrial kaleidoscope of welding tools and sparks with a very nice soundtrack too.