I went to the World Museum Liverpool today to meet Barbara Hind who’s photographs of Buddhists and worshippers in Mongolia are on show.
Originally from Knotty Ash, Barbara visited Mongolia 16 times between 1994 and 2001. The result of her extensive travelling is a group of photographs, providing an intimate portrayal of everyday life for Mongolian Buddhists.
Mongolia suffered under Stalinist repression in the 1930s when 20,000 Buddhists were killed and 500 temples destroyed. Buddhism only started being openly practiced again in 1991. 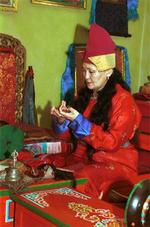 The photographs, which are rich in colour and texture, include scenes of monk ordination, the call to morning worship and Tibetan language classes. These wonderful depictions of daily routines avoid any kind of posed or clichéd shots. Instead Barbara has created images that show enormous respect for the people who are her subjects as well as a gripping insight into an intriguing culture.
The photographs from Mongolian Buddhism have previously been on show at the National Museum of Mongolian History, Ulaanbaatar in 2001, where Barbara became the first westerner to be invited to display her work. This unique exhibition provided the local people, whose lives Barbara had documented, the chance to see the photographs for themselves. They have also been exhibited in Japan and Canada and will, no doubt, go on to several other places.

Barbara says: “The Mongolian Buddhist images have grown out of my personal association with the monasteries and nunneries I have visited.

Through my photographs I try not only to represent my own experience of seeing other people’s worlds but to also try and evoke the people’s experience in those worlds”.
The exhibition is in a separate room on the 2nd floor and runs until October 2nd.

Visitors to Mongolian Buddhism can also see World Museum Liverpool’s own comprehensive display of Buddhist artefacts from Asia in the World Cultures gallery, which includes an evocative Tibetan Buddhist shrine.

Migration at CUC – Extended to 11 January 09