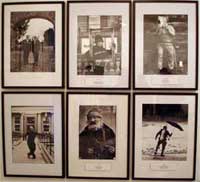 After leaving FACT I fought my way through the heaving crowds and sought sanctuary in View Two, always nice to call in there on a Saturday afternoon and have a drink and a chat with the proprietor Ken Martin.
The current major exhibition on the top floor is paintings by Anthony Brown and photographs by Jim Connolly. Liverpool and its inhabitants feature prominently in both artists recent output though I’m not quite sure what the title means.

Pictured here is one of Brown’s ‘doodles’, they look deceptively simple but I know how they are done (I’m sworn to secrecy) and its a lot more than doodling. Plus, of course, you need an artists eye to know when something looks ‘right’. There are several of these scenes of Liverpool but also some abstracts and he’s working on a project to paint 100 portraits of Liverpool people to be exhibited en masse in 2007. Some of them are here including an excellent picture of Mike McCartney.

Jim Connolly has been photographing Liverpool scenes and ‘characters’ for quite a while and there’s a large selection here. Mostly black & white, some are quite humorous or at least quirky and also quite tender. There’s some famous faces here too including Phil Redmond, Alan Bleasdale and ‘Jacko’ the guy who plays the cardboard guitar in Mathew Street.