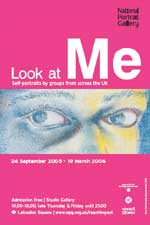 LOOK AT ME
Liverpool community group in national exhibition

Self-portraits, produced in workshops held at National Museums Liverpool have been selected for display at the National Portrait Gallery, London. The self-portraits will be included in the exhibition, Look at Me, running until 19 March 2006.

Working in partnership with the National Portrait Gallery and various galleries and charities around Britain, National Museums Liverpool commissioned local community group Sola Arts to run a series of workshops at World Museum Liverpool and the Walker Art Gallery. They worked alongside professional artists who gave advise on portrait drawing, and used the some of the paintings from the collections at the Walker as inspiration.

The six-month long project was aimed specifically at groups like the homeless, asylum-seekers and those with mental health issues to help them engage with the arts by creating their own self-portraits. In turn, the work produced offers an insight in to the diversity of people living in Britain today.

The work of one of the participants, Raymond Matisko, was of such a high standard that the National Portrait Gallery used his portrait to front the advertising campaign for the exhibition.

Raymond, 23, a first year student at Manchester Metropolitan University, came to Liverpool from war-torn Uganda three-and-a-half years ago as refugee, after his family abandoned him as a child. Alone and neglected in a strange country, he almost turned to suicide. However, he used this adversity as his inspiration.

“I used colours to represent different things I have experienced. The blue represents all of the difficulties and bad times that I have been through in the past, and the red in my eyes shows the terrible things that I have seen during the civil war in Uganda,” says Raymond.

“But, the yellow is positive and represents all my hopes and aspirations for the future, like completing my business and economics degree and getting a fulfilling job at the end of it.

Slow Magic at the Bluecoat

‘The City Is A Stage’ Review