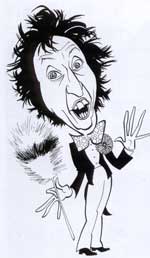 No its not a self portrait! Its a caricature of Ken Dodd which is one of many on show at Editions in Cook St. by John Minnion. John has worked for several national publications during the past 25 years such as The New Statesman and The Listener. Its amazing how a few simple lines can produce such instantly recognisable faces and I do recognise most of them from TV shows, politics or films. Most are black and white but there are few colourful ones such as the collection of TV gardeners which always raises a smile. There are also a few originals amongst the otherwise open edition prints and there are some of John’s books for sale such as ‘Glued to the Gogglebox’ and ‘Uneasy Listening’.
Runs until October 8th 2005.
John Minnions Website
Review by Philip Key for the Daily Post

The Loft Space – ‘On The Waterfront’