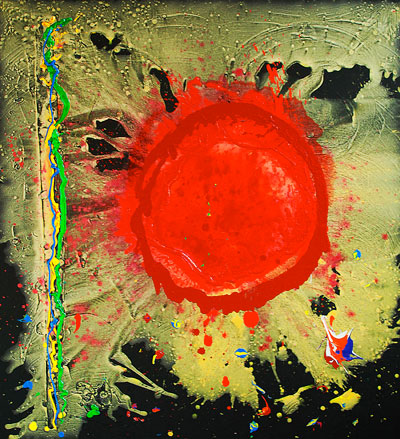 22 September – 17 October 2010
Exhibition of Prints by John Hoyland RA. Major British Abstract Master / Painter. One of a series of four exhibitions of prints by abstract artists. Other exhibitions featuring Derek Culley, Terry Sullivan and David Lach. Part of the Independents Liverpool Biennial strand.
Ends this week, just the 4 large prints but they really are rather good.
Hoyland has received many awards throughout his career, including the Calouste Gulbenkian Foundation Purchase Award (1963) and a Peter Stuyvesant travel bursary (1964). He was also a Prize Winner at the John Moores Liverpool Exhibition (1964) and later won First Prize (1982). He received an Arts Council purchase award (1979), joint first prize (with William Scott) in the Korn Ferry International (1986) and first prize of the Athena Art Award (1987).

In 1998 he won the Wollaston Award for the most distinguished work in the Royal Academy Summer Exhibition. Hoyland developed strong links with America from the late 1960s. He was appointed Charles A Dana Professor of Fine Art at Colgate University, Hamilton, New York in 1972 and was artist in residence at the Studio School, New York in 1978 and at Melbourne University in 1979.

He was elected to the Royal Academy in 1991 and in 1999 was appointed Professor of Painting at the Royal Academy Schools. In 2001 he received an Honorary Doctorate from Sheffield Hallam University. John Hoyland lives and works in London.

Review: Bingo and Burial: A Changing Landscape of Liverpool

Locusts on a Stick – Apocalypse Now at Red Wire