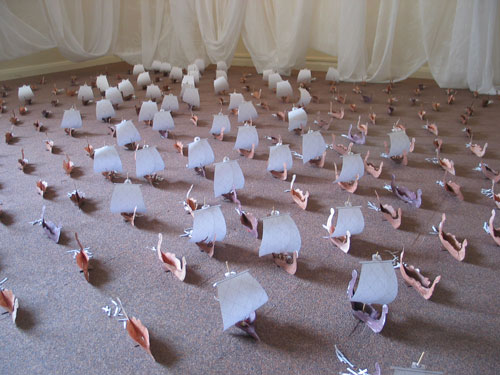 For the first time in its ten year history, the Millenium Centre in Leasowe will be providing studio space for an artist in residence. Following the aims of the centre  to support  the community ,  Wirral artist Wendy Williams will work with the public  hosting workshops and creating artworks that link with the history of the area.

After exhibiting in Tromso, Norway earlier this year, Wendy began a series of artworks that were influenced by the Norwegian culture. It was during research that she began to find a link between earlier Norwegian settlements – the Vikings, and the area that became eventually known as Leasowe.

While running a workshop at the Williamson Art Gallery, Wendy had a chance meeting with a colleague of Leasowe Development Trust’s chief executive  Roy Sherriff. She talked about her Norwegian experience and it was from this that the idea of working with the recreation centre came about.

Roy and Wendy met up and began discussing the possibilities of creating artworks that could involve members of the public, but also link to the surrounding areas.

To start the project off, Wendy has made 300 Viking longboats out of paper, which she will build an installation with, in a room at the centre. Members of the public are invited to pick up a template of one of the boats so that they can design and colour in one of their own and either take it away, or have it added to the installation.

The installation will be available to view daily while the centre is open and other tasks and worksheets to take away will be added over summer.  Wendy will be on hand to talk about her  own work most Mondays and Fridays between 13.00 and 16.00.

‘Lustre’ Ceramics by Sutton Taylor at the Cornerstone

Review of ‘Kylie: The Exhibition’ – Manchester