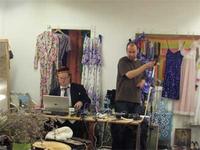 Despite my late night fun (see Part 1) I managed to rise early and get to Urbis for breakfast (nice cafe there) and view the Punk show before walking downtown to the Bridgewater hall to see the Fuzzy Logic exhibition which was part of the Low Grade event curated by Michael Connor (formerly at FACT, Liverpool, now Head of Exhibitions, BFI South Bank) and film and video artist, Jackie Passmore (US).
‘Fuzzy Logic demonstrates how new media artists are turning back to the loom, combining technology with the knitting needle to create a new wave of fabric-based media arts, mathematical knitting and textile activism.’
Luckily one of the artists, Cat Mazza (U.S.) was there to explain her knitting machine installation. I recommend you look at her website http://microrevolt.org/knitPro.htm rather than me trying to explain it. There was also such things as a cushion with a loudspeaker by LoVid and Mathematical Afghans from Woolly Thoughts 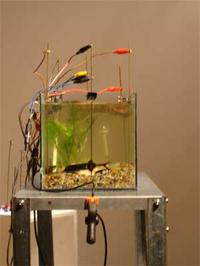 Then its back uptown for another tour of the Northern Quarter venues (feeling more at home as its been raining non-stop for several hours). Amongst other things there were these ‘amplified fish’ in a tank in the Chinese Arts Centre (well worth a visit). This is ‘Amplified electric organ discharge of Long-nose Elephant Fish.’ and was part of aLECTRO_eCOUSTIC, an interesting mix of sound works and roving musicians who also appeared at a second-hand clothes shop My Goodniss (also has a gallery downstairs) and the Oklahoma Cafe (an excellent place which also the new home of Pelican Neck records).

I really enjoyed the Interruption event at Night & Day – a selection of silent films accompanied only by improvised jazz violin, electro-acoustic artists and harmonizing vocals. Here improvised soundtracks and original films communicate colour, shape, rhythm and movement in the same direct way. There were 10 short videos each accompanied by different musicians who had never seen the films before. Excellent.

Speaking of excellent, seeing techno-funkster Jamie Lidell with Pablo Fiasco on Visuals at Bridgewater Hall later was a delight, a great end to the weekend.

‘These Living Walls of Jet’ at Ceri Hand Gallery

100 Languages of Children at World Museum