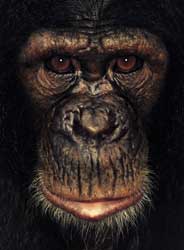 Yes, I know. Just like looking in a mirror isn’t it? Not for me though, obviously, as I had a shave this morning and anyway this is a female chimpanzee. One of 30 large (2 metre high) photographs of apes in the World Museum Liverpool titled ‘Face to Face’ by the artist and photographer James Mollison. They are in the large room on the 2nd floor.
They are mainly orphans, victims of the illicit trades in ‘bushmeat’ and live animals. Many were suffering physical and emotional trauma when they were rescued.
There are Bonobos, Chimpanzees, Gorillas and OrangUtans, all very human-like and similar but with their own characteristics. I must admit I got a bit tired as I moved on to see more and more of these giant passport style photos staring at me. But interesting none-the-less.
At World Museum until March 26th 2006

Stage One: The Drawing House at Wolstenholme Sq.