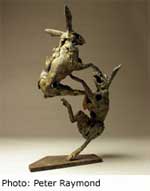 Emma Rodgers‘ work has received local and international acclaim for its dynamic, energy exuding approach to her subject matter of human and animal forms.
She has several works, created in her studio on the Wirral, on display and for sale at the Bluecoat Display Centre. They are certainly eye-catching, animals in dramatic poses often looking incomplete which just adds to the feeling of action. She uses aged metal or torn clay so the figures have a distressed or fragile look, some (but certainly not all) just a bit too distressed for my own taste.
There are human figures too or at least parts of human figures and also framed drawings/sketches on the walls.
Her work is very popular, her “Monkey and Baby” was the Lady Lever artwork of the month a while ago, and they appear to be selling well.
Emma’s illustrated lecture and demonstration takes place on Thursday October 20th 2005 14.30-15.30 (£3.95) should be interesting.
The exhibition runs until October 29th 2005

Sachiko Abe at A Foundation

Raymond Sinclair and Stephen Collett in the Mocha Lounge

Imogen Stidworthy ‘The Work’ at Loughborough