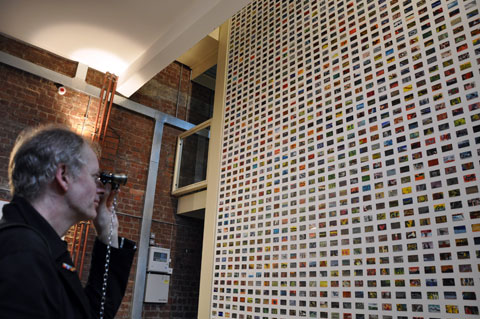 Opening on the 180th Anniversary of the Liverpool and Manchester Railway, inside the buildings of the oldest existing passenger railway station still in use, this exhibition celebrates the first journey taken between two cities through a series of large-scale works which reflect on time, routine, repetition, direction and discipline; qualities that all inform the artistic process. Featuring artists: Gareth Brew, Nicola Dale and composer Ailis Ni Riain, Phil Lockhart, Tom Palin, and Richard Proffitt.

A very interesting exhibition of just 5 pieces, one by each artist. I say 5 pieces but actually Tom Palin has installed 2,000 paintings all on used train tickets and Nicola Dale has hand-cut 12,000 feathers from a collection of 1970s Ordnance survey maps. So this exhibition was a long time in the making, 180 years to be precise!

You can get up close to some of Palin’s pictures (‘2000 Journeys’) but they stretch up so high that binoculars have been provided to assist viewing. Dale’s feathers (‘Down’) look as if they have fallen from from the high rafters of the Accumulator Tower where they are installed along with some lovely sounds by Ailis Ni Riain.

Phil Lockhart’s Arch (to George Stephenson) surprised me as I though there were blue lights inside but its just a clever use of colour with the blue paint reflecting onto the white surface. Its an impressive modernist re-working of the grsnd Moorish Arch which was created at the entrance of Edge Hill station for the opening of the railway.

I would love to see an actual train covered in Gareth Brew’s illustration ‘Train-wrap design in celebration of 180 years of rail travel’.  I don’t think it’s going to happen but as well as the piece here there is some on the old wall by platform 1 at Lime St station.

Richard Proffitt’s installation ‘Safe Place (Temple 3)’ takes up the whole of the Upper Engine room and is a fascination collection of fragments left by a group of time-travelling train-hopping hobos. It’s a mix of sci-fi and roughly constructed objects – I like the monitor made out of an old box and bits of wood.

So each work in the show is worth spending a fair amount of time on and the whole show has been very well put together by curator Jenny Porter. The very nice catalogue includes an essay by writer Kenn Taylor, the exhibition will hopefully draw more attention to this great arts centre and their project to archive the history of the station.

Bravo for the Bra at Liverpool Academy of Arts

Nordic Knitting at the Bluecoat

Fashion V Sport at The Walker