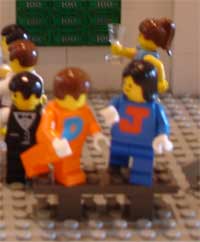 Ok, not the real Mr Hirst but its pretty lifelike, here he is with his shark in a tank piece being lauded by a large crowd with empty wine glasses.
Its the work of ‘The Little Artists’ – John Cake and Darren Neave who you can see in the other photo. The whole piece is a minature art gallery entitled ‘Art Craziest Nation’ and includes models of famous YBAs such as Tracey Emin, Marc Quinn, Chris Ofili and Grayson Perry dressed in one of his notorious doll-like outfits. There’s also Steven Gerrard holding an over-sized European Cup.
Its still being assembled in the area at the top of the stairs in the Walker and opens on Saturday August 20th until January 29th.
Daily Post article
and Guardian
and BBC