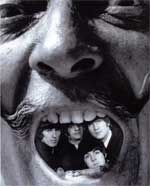 The Mathew St Gallery which sells prints of John Lennon’s art and photographs of the Beatles closed a few months ago but has just re-opened for one exhibition over the Mathew Street Festival period.
‘Salvador Dali meets The Beatles – The Photographs of Robert Whitaker’
is just as it says in the title except they never actually met. Whitaker was the Beatles photographer from 1964 to 1967 and a friend of Dali’s from the late 60s to early 70s. There are nearly 50 pictures of the Beatles and several of Dali. You can buy them but they’re not cheap. Though the limited edition book (5,000) of the Dali pictures for £40 seems reasonable value.
Until Sept 4th (Mon-Sat 10-17.00; Sun 11-16.00)
Philip Key’s Daily Post report.

Max Eden at University of Liverpool

Does my Head Look Big in This?