Currently on display at the Walker Art Gallery are three major new works by Conrad Shawcross. These specially commissioned sculptures collectively known as ‘The Steady States’ address complex themes of cosmology, quantum mechanics and musical theory, deriving their name from the ‘steady-state hypothesis’, a theory relating to the creation of the universe. 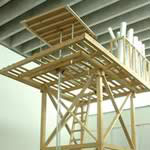 Harmonic Tower 2005, a large pine structure consisting of a series of pendulums, is an oversized version of a Victorian Harmonograph. As the pendulums swing, paper is drawn through the machine creating mathematically patterned drawings which offer a ‘visual interpretation of musical harmony’. Although displayed in its stationary state, the resultant images arranged horizontally and vertically throughout the exhibition were produced by the artist once it was installed in its current space. 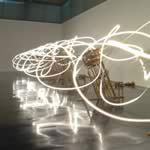 This theme is continued in Loop System Quintet. Light patterns are created as the five machines rotate, each machine producing a visual transcription of individual musical cords. This sculpture also contains a scientific element relating to ‘String Theory’. This states that ‘matter is comprised of vibrating strings of energy rather than single isolated particles’, hence the knots of energy produced by the lights. These are shown on screens positioned to one side of the machines. 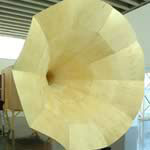 The third and final piece was inspired by Shawcross’s interest in the creation of the universe. Space Trumpet recreates the Bell communications antenna, a radio telescope which proves the ‘big bang’ theory (and in turn undermines the ‘steady-states hypothesis’). The sculpture looks like a giant gramophone speaker, and as with the other pieces is constructed almost entirely from wood. This gives it an organic quality which directly contrasts with its technical origins.

This display is unlike anything I have seen before. While the different inspirations for the exhibition are complex, the sculptures are powerful and challenging, the accompanying information allowing the viewer to fully grasp the artists’ intentions.

‘What You See, But Dont See’ at Loft Space

The Stuckists at View Two