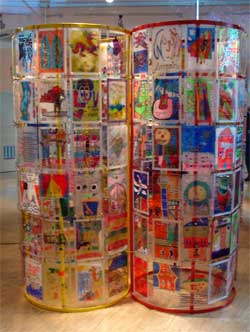 The Observatory at 1 Old Haymarket is the home of Liverpool Vision, the Urban Regeneration Company. Obviously public and community art is a vital part of regeneration so Peter Rix their Community/Education Officer is busy with various projects the latest of which is now on show to the public.
Merseyside Play Action Council (MPAC) have organised the ‘Storylines’ project, supported by the Liverpool Culture Company. More than 120 children from five different youth and sports centres, aged from 5-15 years old, took part in the colourful drawings, with everything from buildings to nature and what they think culture in Liverpool is.

I called in on Friday when a few of the children were there along with MPAC organiser Eileen Wong who said
“The purpose of the project was to produce a visual image of how the children saw as “their” city, “their” cultural background and more specifically what makes Liverpool a special place for them. The children’s idea of what the project was proved very different to the artist’s and the young people used colour very early on, creating detailed drawings and lots of experimentation took place.”

I admit I didn’t know much about MPAC before but it looks like a really useful resource for artists and anyone working with children and young people. Take a look at their website www.merseyplay.com

So here are the stands displaying the 120 delightful pictures on sheets of perspex. I’m afraid I don’t know how long they’ll be there for, probably a few weeks. The five youth centres who took part were Norris Green Yth Centre, Speke Adventure Playground, The Greenhouse Project and Rice Lane City Farm and the Vernon Sangster sports centre.

Also in the Observatory you can see the ‘Your City Centre’ exhibition and the scale models of the plans for the Lime St Gateway development, the Kings Dock waterfront and Central Village (back of central station) developments. All very interesting. more info on their website www.liverpoolvision.co.uk

Artwork on the Windows of HoSt Restaurant

Riverpool and Ferry Boats at Liverpool Academy of Arts