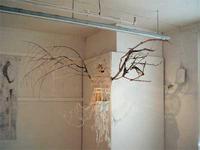 I do like the Myrtle Group. I remember their degree show in this same gallery last year when they graduated from the Community College (in Myrtle St., hence the name). That was before my blogging days but there’s a review on the catalyst-media site. Then they a had a show inside the Williamson Tunnels during the Biennial.
Blanch means to whiten or remove colour and this show is the nine artists in the group responding to this concept. An art exhibition on the absence of colour, an interesting idea.
Sheila Nickson’s ‘Untitled’ – Caution Sharp Objects! Is a large piece made from paper, thread, glue and string. The sharp objects are needles hanging from the base of the piece. Bits of string are escaping through holes in the paper.
‘Sleep’ by Des Shaw has a cast of the artists face stuck to a pillow in front of a video showing him in a seemingly troubled sleep. Quotes such as ‘Dreams of the future are better than the history of the past’ are placed around the area.
Tommy Tant’s ‘Tree to Tree’ is about recycling. He has taken part of six months worth of junk mail (still in their white envelopes) and made it into a tree shape which hangs from the ceiling in the middle of the room. Unfortunately a few people have trodden on the ‘roots’.
Jane Hughes has couple of excellent ink on paper studies of the Life Room at JMU art school where she now studies. Also an abstracted acrylic on canvas painting called ‘Night Caller’ and 4 sets of 7 bars of soap (Lux, if you’re interested) each with a hair trapped on them which creates a type of drawing.
‘Landscape’ by Leedi Huo is a landscape picture made up of a set of 8 (I think) pieces of canvas. Various shades of white/grey/black ink has been used to try and convey how it would appear with the colour removed.
At first, I didn’t understand why Barbara Galt’s sculpture was titled ‘The Tree of Life’ but I eventually spotted that the tree trunk is formed from the male and female figures with their arms spreading into the branches and their legs becoming the roots. Nice one. She also has two works entitled ‘Celtic Connections’ which has various cardboard shapes stuck onto board in a not-quite-celtic pattern and spray-painted. Although its all white the 3Dness of it allows plenty of colours to appear if you know how to look.
Elizabeth Willow has few pieces on show mostly made from found objects, twigs, feathers, bones, seeds and pieces of cloth, buttons, lace and thread. All beautifully crafted into interesting pieces. The largest called ‘They Breathe in me as Angels’ is pictured here.
Claire Freeman’s ‘Exposure’ is a large piece of fabric covered in light-sensitive emulsion paint. Patterned shapes have been created by, presumably, exposing parts of the painted areas to the light. Also a mobile of relics such as keys, rings, bottletops, feathers, etc. painted white is hanging from the ceiling.
The whole of one corner of the room is covered in a sort of huge spiders web made from polyester thread by Ann Stevenson. Its nice to walk underneath it and look through the threads. I also like her installation ‘My Family’. Its a table all laid out with plates and glasses, the plates are printed with pictures of the family members and the tablecloth is printed with the type of typical statement we would often hear at the family dinner table. Such as ‘Eat your greens’, ‘Wash your hands before you eat’ and ‘Mind your manners’.
A most enjoyable, thought-provoking show. Runs until July 28th.

Photos and Sculptures at Liverpool Academy of Arts