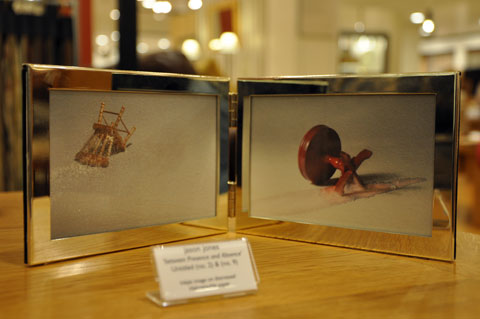 Jason Jones, manager of Liverpool Hope University’s prestigious Cornerstone Art Gallery, is the first artist ever to take the Independents Biennial into a major national department store in Liverpool One: John Lewis. The 2010 (Independents) Liverpool Biennial coincided with the end of Jason’s MA; he realised that exhibiting within the Biennial would maximise exposure of his work.

The size and technique of the work produced developed from restrictions such as having to double up a work office as his studio – he needed to develop smaller work on whatever media was required, and he points out that had he been using a large studio the work would have been very different.

Regarding the choice of venue, in 2009 Jason started of a collection of doll’s house furniture. The subsequent work felt personal in a way that the gallery system may not be conducive to exhibiting. He also wished to tackle the traditional method of presenting work and so question what an image presents.

Focussing on previous research, the artist discovered a clear link between these objects and the classical section of the John Lewis furniture department. After approaching the store with a proposal to exhibit there, several months of discussion led to an agreement. Since, the project has been supported energetically and confidently.

Jason says that he loves the fact that the work is exhibited in John Lewis’s household picture frames. As he manages a gallery space and daily discuss its political pros and cons, this has given him a new and different challenge. In deciding where to exhibit the work there was a ‘eureka’ moment when the idea dawned. He had struggled with the issue, and was photographing doll house furniture when he realised the solution was obvious: place the question on the objects! He just had to get someone to allow him to do it. The rest is history.

Slow Magic at the Bluecoat

There’s an Iceberg at the Pier Head!

Birds of a Feather at Bluecoat Display Centre