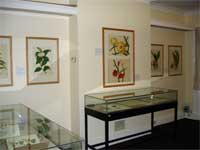 ‘A Growing Concern’ at the University’s Art Gallery in Abercromby Sq
. is an exhibition examining Liverpool’s first botanic garden, which was founded by William Roscoe and opened in 1803 and located between Myrtle Street and Crown Street (there are blocks of flats there now).
Roscoe was born in 1753 in the ‘old bowling green house’ on Mt Pleasant, presumably near to where Roscoe St. is now. There is a hand-coloured engraving of the house in the exhibition.

Roscoe studied law and became an Attorney, he was a keen abolitionist and along with James Currie wrote the poem ‘The African’, they helped establish the Athenaeum Club which is still in Church Alley and co-founded the Botanical Gardens. Roscoe wanted to contribute to ‘Renaissance Liverpool’, we could do with more people like him now.

He was especially interested in Monandrian (single stamen) plants so many of the pictures of this type but there is a wide range of botanical art, contemporary documents and publications, including a selection of the City Library’s original watercolour drawings for Roscoe’s great monograph of the ginger family, Monandrian Plants of the order Scitamineae. Other items of note include rare botanical printed books, including Roscoe’s own copy of William Roxburgh’s Plants of the Coast of Coromandel, and Hexandrian Plants, by Elizabeth Bury.

In 1816 Roscoe was declared bankrupt after investing in a bank that collapsed. The gardens became somewhat neglected and were moved to Edge Lane in 1830.
The exhibition runs until December 16th and there is a slide lecture by Dr John Edmondson on November 4th at 13.00

Art in the Age of Steam at The Walker

Daniel Pasteiner at A Foundation