Supported by the Liverpool Culture Company

Liverpool has enjoyed a rich and varied history. From humble beginnings as a small fishing village to a booming maritime city at the heart of Industrial Britain, Liverpool has seen its fortunes rise and fall over the centuries. Modern Liverpool is a city rich in pop culture and with a thriving visual arts scene that is embracing the regenerative power of culture in the build-up to the Liverpool European Capital of Culture 2008. To mark these celebrations Tate Liverpool is delighted to announce a series of exhibitions inspired by the people, and perceptions, of a city in transition.

Centre of the Creative Universe: Liverpool and the Avant-Garde
20 February – 9 September 2007

To coincide with Liverpool’s 800th anniversary celebrations, this major exhibition investigates how the city has influenced and inspired a diverse range of important post-war artists. Centre of the Creative Universe, which takes its title from a statement by Beat poet Allen Ginsberg, explores how artists have contributed to an external view of Liverpool in people’s imaginations, and reveals, as well as challenges, myths of the creative scene in the city over the past four decades.

In that time Liverpool has emerged as a centre of global pop culture, a source of inspiration for documentary photography practice and politically motivated tendencies, and played host to a series of major avant-garde artists and movements ranging from Pop to Conceptual Art. As a result, Centre of the Creative Universe will include some of the most prominent artists of the last fifty years such as Keith Arnatt, Bernd & Hilla Becher, the Boyle Family, Jeremy Deller, Rineke Dijkstra, Adrian Henri, Candida Höfer, John Latham, Yoko Ono, Martin Parr, Bob and Roberta Smith, Sam Walsh and Tom Wood. The exhibition brings these key figures together in Liverpool, and through the interplay of their works, presents an ambitious history of the visual arts in the city, and explores the city’s status as a work of art in the mind of the artist.

Liverpool has always embraced the thriving Chinese community that has been living and working in the city for centuries: the city is twinned with Shanghai and is home to the oldest Chinese community in the UK. This commitment to the city’s communities is reflected in the forthcoming exhibition Contemporary Art from China. The exhibition will present an overview of work made in China since 2000, which will include new commissions by established artists, showcase some of the strongest and most spectacular works made in recent years, as well as present an in-depth survey of work by an emergent generation of young artists.

Increasing cultural and economic exchange between China and the rest of the world has led to a mutual curiosity which has brought about a change of perceptions in both directions. Contemporary art has started to enter society and public consciousness within China, but with an awareness of international practice. As a result of this, contemporary art practice has changed, often radically, over the course of only five years. These predominantly young artists have chosen to remain in China, unlike many of the generation before them. They are moving towards a self-confidence and maturity that stems from an understanding of the contemporary world, China’s place within it, and the contemplation of their own positions within a society undergoing rapid and profound cultural change.

The exhibition at Tate Liverpool will be the first show in the UK to reflect the varied and complex nature of contemporary art in China, and will present a comprehensive overview of some of the most interesting and important art to be made since 2000. Working in close collaboration with the Beijing-based writer and curator Karen Smith, and the Shanghai-based artist, critic and curator Xu Zhen, Simon Groom, Head of Exhibitions at Tate Liverpool, has spent several years researching the artists and works for the exhibition. The exhibition will feature work, in a variety media, by about twenty artists, and will include several large-scale installations, and several new commissions. 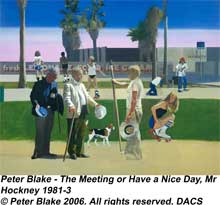 Tate Liverpool will present a major retrospective exhibition of paintings by Peter Blake, the largest since his Tate Gallery exhibition in 1983. A highly influential and original artist, Blake is often described as the godfather of British Pop Art and Liverpool’s adopted son. This exhibition will survey his rich and diverse oeuvre, presenting familiar icons as well as rarely seen works.

At the core of Blake’s work has been his fascination with popular culture, including music, film and sports. Blake has worked in a variety of media including painting, drawing, printmaking, illustration, collage and sculpture. Tate Liverpool’s retrospective will focus on Blake’s two-dimensional work and in particular painting, presenting a diverse body of work from the 1950s to the present day. It will include major icons of twentieth century art, such as On the Balcony (1955-57), The Toy Shop (1962) and The Beatles (1963-68). It concludes with the Marcel Duchamp World Series, a project which has recently occupied the artist. A major publication, the first in-depth survey of the artist’s work since the 1983 catalogue, will be produced to accompany the exhibition.

These exhibitions are supported by the Liverpool Culture Company and are a part of the 2007 programme of activity that will take place across the city.