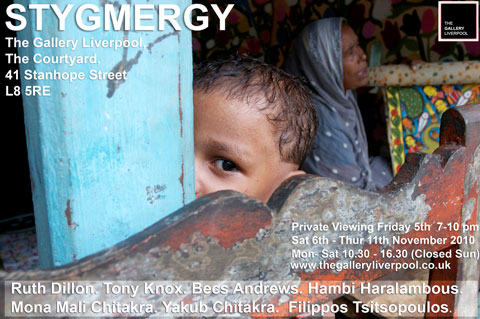 Just to confirm there is a viewing tonight Friday even though there was one last night at The Gallery Liverpool in Stanhope St. This exhibition is only on until next Thursday 11 November 2010 – try not to miss it.

“STYGMERGY”
Stygmergy is a mechanism of spontaneous, indirect coordination between agents or actions, where the trace left in the environment by an action stimulates the performance of a subsequent action, by the same or a different agent. Stygmergy is a form of self-organization. In 2010 a group of artists embarked on a Contact Base initiative.

As part of an EU commission Pax Liverpool sent 5 British artists to to collaborate and respond to residencies in West Bengal, Northern India. Contact Base have been working with rural and tribal artists for 5 years and through an Intangible Cultural Heritage Program, the lives of both British and Indian artists overlapped and the result of some of the works are on display in Liverpool this month.