From Dave Ryan at Highblue, its not visual art but sounds interesting if you are into story-telling… 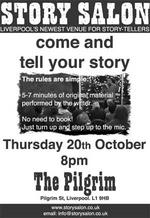 What is Story Salon?

Story Salon US began in a North Hollywood coffee house in 1996. The rules of the show are simple:

Five to seven minutes of original material performed by the writer.

This open policy, embracing a sort of “free-range” writing, results in one of the most eclectic hours of performance available.

Story Salon UK is being hosted by Liverpool based arts organisation highblue (http://www.highblue.co.uk) through it’s involvement with Story Salon US Producer Lance Anderson.

It has been described by The Los Angeles Daily News as: “Equal part writer’s workshop, stand-up club and group encounter,” the weekly get-togethers are alternately entertaining, engaging, and provocative, with subject matter ranging from the surreal to the confessional.

In the words of Story Salon’s founder, Beverly Mickins:

“First-person storytelling is an affirmation of one’s life, a reminder of the similarities of all the experiences we share — it connects us more to our human-ness, or our humanity, and reaffirms our place in this fast-moving world. What we need are fellow beings to witness who we are, and share in the joys and struggles, and rejoice in our common humanity.”

Story Salon’s mission is:
-to perpetuate the oral storytelling traditions;
-to let the public know that ordinary people, that everyone, has a story to tell that’s worth hearing; and
-that everyone deserves a safe and supportive environment in which to share their story.

There’s no need to book. Just turn up on the night and step up to the mic.

Lunch with the Dream Machine Artists

Pipilotti Rist on the BBC Big Screen And FACT