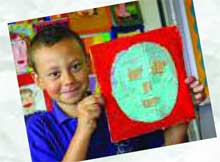 An art exhibition produced by ten schools in Garston

Exhibition will be opened/launched by

Special performance at 7.30pm by the CPC (Child Parents Community Orchestra), based at St Austins, Garston, showcasing the musical talents of South Liverpool and Garston Communities, directed by Alex Costello.
All welcome

The project, an artist in residency programme, encouraged the artistic talents and imagination of pupils, staff, and all involved. It aimed to raise awareness of recycling and its importance economically and environmentally with creative approaches to making art.

Participants wanted for performance ‘From The River To The Sea’