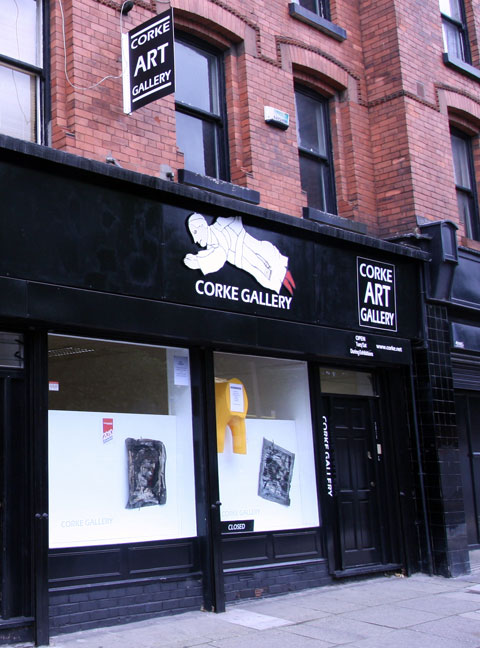 A ‘flying’ Pope titled ‘AGENT PREVARICATOR’ has appeared on the front of the Corke Art Gallery on Aigburth Road in South Liverpool along the route travelled by the previous Pope when he last visited the city.  The artwork appeared on the first day of the Liverpool Biennial to mark the start of the two week ‘‘Outsiders’ In’ exhibition at the Corke Art Gallery which is part of the Independents Biennial Festival (www.independentsbiennial.org).  The work of 45 artists will be shown during the exhibition which is split into two 5 day shows – Part 1 and Part 2.

Gallery owner Nic Corke said: “This is the largest exhibition of limited edition and original ‘outsider’ art to be exhibited in a gallery in the North West of England.  No other artist showing in the 2010 Liverpool Biennial has captured the imagination or attention of the public like Banksy so I am delighted that the Corke Art Gallery is the only venue in Liverpool to be exhibiting so many of his famous images along with the work of  44 other artists whose work is striking and thought provoking”.

New pieces have been specially created for the show by Ernesto Muñiz from Mexico City who is currently touring the world and creating the artwork as he travels. The work created by iRat in response to the Papal visit – Agent Prevaricator (the flying Pope) – has been installed on the front of the gallery with the tag line ‘Lord punish those who trespass in thy name and enlighten those who refuse to accept facts’ which has already generated positive and negative responses by the public walking by the gallery.

Entry to the show is free but by ticket only which can be ordered by emailing gallery@corke.net

FACT presents a work for cyclists by artists Blast Theory