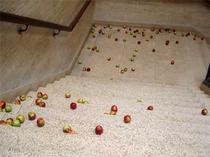 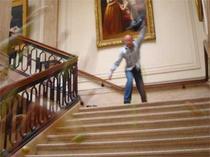 Well, I have to admit, I will be watching the football on Saturday afternoon (come on you Reds!) but otherwise I would be going to the Walker for the final event of the Poetry In The City Festival.

Poetry in the City: Performances and versions is staged between 1430 and 1630 hours this Saturday 13 May 2006. The performance premieres new works by poets Philip Davenport and Tony Trehy while also featuring a work by improvisational sound artist Ben Gwilliam.

Philip’s new work is a collection of poems made from overheard conversations called Constellation of Luminous Details. Tony’s is called 50 Heads – a meditation on language and control.

The event starts with Philip rolling imitation apples down the Walker’s main staircase. He and Tony later perform poetry readings. At the end Ben improvises a 20-minute piece using tape loops of Philip and Tony’s poems.