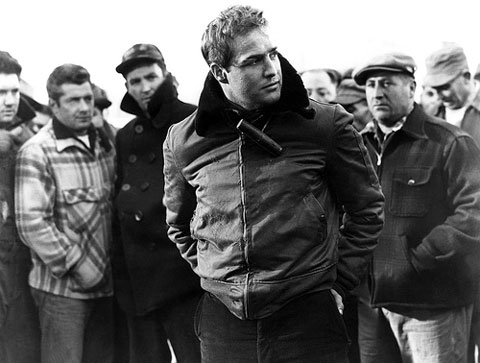 One of the greatest films of all time, Marlon Brando’s ‘On The Waterfront’, is coming to Liverpool in a great free open air spectacular.

The powerful story, concerned with the problems of trade unionism, corruption and racketeering, features Brando at the peak of his career and will be screened at the world famous Liverpool waterfront on Saturday, September 26 2009.

The new Museum of Liverpool will be transformed into a gigantic 24-metre wide cinema screen for On The Waterfront, the last of three weekends of free entertainment at the Pier Head this summer, commissioned by Liverpool City Council and produced by Walk The Plank.

Brando’s eight Oscar award-winning epic, which inspired the name of the festival, is just one of a number of classic films and audio visual performances to be screened at the Pier Head from Friday, September 25 until Sunday, September 27.

More than 2,000 people are expected at the Pier Head to watch the 1954 classic, which was last year shown outdoors in San Francisco.

An estimated 55,000 have so far flocked to Liverpool’s Pier Head and Allbert Docks for the first two instalments of Music and Art On the Waterfront, which were supported principally by the Royal Liverpool Philharmonic Orchestra and Tate Liverpool. Film On the Waterfront is supported by FACT’s new AND (Abandon New Devices) multi-media festival.

The Friday evening from 7.30pm will see ‘The Long Day Closes’ by acclaimed Liverpool film maker Terence Davies. This is the story of 11-year-old Bud, a sad and lonely boy growing up post-war, 1950s Liverpool as he struggles through his days with cinema as his main source of solace.

The Saturday night entertainment starts at 7.30pm with an evening dedicated to classic shorts and feature films. Brando’s ‘On The Waterfront’ starts at 8pm.

From 12 noon until 5pm during the three days ‘The Big M’, a unique and mobile art space, will provide an alternative to the conventional gallery setting and is the only touring venue of its kind across the UK. A series of short videos will be shown throughout the weekend.

During the weekend visitors will also be treated to other entertainment and street theatre.

Josh Kirby and The Return of The Jedi

The Ballad of Juniper Davy and Sonny Lumière