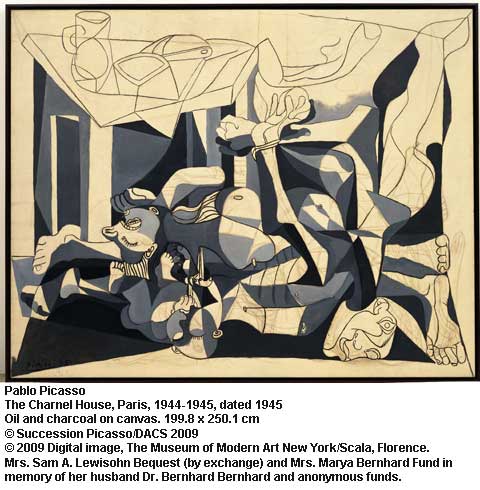 Admission £10 (£8 Concessions)
Tate Liverpool have been working on this secretly for a few years now and called a Press Conference today for the Big Announcement.
My initial reaction, I admit was ‘hmm, Picasso again, haven’t we done that before?’ But now I’m actually quite excited as the show focuses on Picasso’s political activism and campaigning for peace and covers the period 1944 to 1973. And now I think about it, I’ve only seen Picasso’s in isolation so I’m looking forward to being immersed in a massive show of these works in context.
A major exhibition bringing together over 150 works by Picasso from across the world will be presented at Tate Liverpool from 21 May to 30 August 2010. Picasso: Peace and Freedom will reveal a fascinating new insight into the artist’s life as a tireless political activist and campaigner for peace, challenging the widely-held view of the artist as creative genius, playboy and compulsive extrovert.

This is the first exhibition to explore the post-War period of the artist’s life in depth, and will reflect a new Picasso for a new time. Twenty years after the fall of the Berlin Wall, the exhibition provides a timely look at Picasso’s work in the Cold War era and how the artist transcended the ideological and aesthetic oppositions of East and West.

The exhibition will bring together key paintings and drawings related to war and peace from 1944-1973, alongside a wide range of contextual materials and ephemera. The centrepiece will be the artist’s masterpiece, The Charnel House 1944-45, marking 50 years since it was last seen in the UK. This remarkable work was Picasso’s most explicitly political painting since Guernica 1937. Monument to the Spaniards who Died for France late 1945 to 31 January 1947 will also feature in the exhibition along with The Rape of the Sabine Women 1962, painted at the height of the Cuban Missile Crisis on the verge of Third World War.

Picasso’s Dove of Peace became the emblem for the Peace Movement and universal symbol of hope during the Cold War. Picasso’s lithograph of the fan-tailed pigeon, given to him by Matisse in 1948, was selected for the poster of the First International Peace Congress held in Paris in 1949. Picasso later provided variations on the dove for the Peace Congresses in Wroclaw, Stockholm, Sheffield, Vienna, Rome and Moscow. The dove also had a highly personal significance for Picasso going back to childhood memories of his father painting doves kept in the family home. In 1949 Picasso named his daughter ‘Paloma’ – Spanish for ‘dove’ – born in the same month as the Peace Congress in Paris.

Pablo Picasso (1881-1973) was arguably the most influential and prolific artist of the 20th century. After 1944 Picasso, the greatest living artist, became a figurehead of left wing causes. He joined the Communist party in 1944 and it was during this period that the political content of his work came to the fore. His paintings frequently reference and comment upon key historical moments, chronicling human conflict and war, but also a desire for peace.

The exhibition is organised by Tate Liverpool in collaboration with the Albertina, Vienna where it will be shown following its presentation in Liverpool. Vienna hosted the World Peace Congress in 1952, promoted by a poster featuring Picasso’s drawing of a dove surrounded by a circle of interlocking hands.