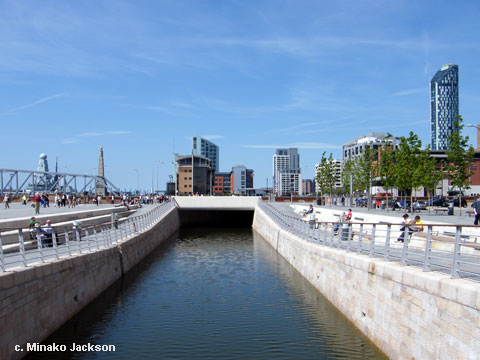 LIVERPOOL GOES TO TOWN ‘ON THE WATERFRONT’

Liverpool’s Pier Head and Albert Docks will become Britain’s greatest FREE outdoor cultural venue for a spectacular season of ‘On The Waterfront’ events this summer.

The ‘On The Waterfront’ season, which plays on the city’s connections with New York, will involve collaboration with key creative partners such as the RLPO, National Museums Liverpool, Tate Liverpool, FACT and Liverpool Lantern Company.

The waterfront festival is one of the showpiece highlights of Liverpool’s 2009 cultural calendar and will incorporate elements of Liverpool’s critically acclaimed European Capital of Culture programme.

The schedule: (all timings tbc)

Sat 15th and Sun 16th 12.00 – 17.00, Albert/Salthouse/Canning Dock
With Colour Chart at Tate Liverpool as a catalyst, join us for a family-friendly weekend programme with interactive theatre performances, an outdoor Colour Tent in Mermaid Court hosting a range of colourful creative activities including lantern making.

Located at the south end of the Pierhead site, with the window of the new Liverpool Museum acting as a gigantic cinema screen, this is a weekend of cinema and digital arts produced in partnership with FACT.

Fri 25th 19.30 – 23.00
Abandon Normal Devices – AND Festival
AND is a Festival of New Cinema and Digital Culture, and a partnership between three of the northwest’s media art organisations ;FACT, Folly and Cornerhouse. Expect cinematic shenanigans and an evening of remixed and remastered innovative and contemporary screen work.

Sat 26th 19.30 – 22.00
Pictures at the Pierhead
A night of big screen cinema classics, with thematic connections to the waterfront location, and a supporting programme of locally produced short films.

* More details of the ‘On The Waterfront’ season will be announced over the coming weeks.

A Sleepy Weekend in Liverpool

Will Sergeant Art – Echo & The Bunnymen

Global Studio at the Bluecoat