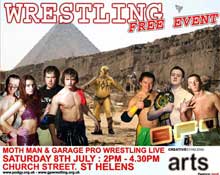 Knox was drawn towards wrestlers through a series of art projects concerning heroes and villains. After a chance encounter with Big Daddy after leaving Art college, Tony began to document the UK wrestling scene. Choosing to receive training in exchange for his photography work, Tony began to integrate himself into the wrestling community. Seeing the moth as a symbol of his own awkwardness, of his propensity to be drawn towards danger, Knox created Moth Man; the tragic dysfunctional hero that would save you if he could save himself.

Since April 2004, Moth Man has become a legend among both arts and wrestling communities. But all accolades come at a price; during his last match as part of the last Liverpool Biennial, Knox was left with a suspected fractured wrist after being distracted by a light bulb during a crucial part of the fight.

Garage Pro Wrestling is one of the leading wrestling promotion companies in the country. Claims that wrestling is the ‘modern day theatre’ are more than validated by GPW’s endlessly inventive story-lines and the humour and ingenuity put into each event, which in the past have included a wrestling chess-match and a hair-cutting competition.

Come expecting wrestler masks, a boy brass band, a man dressed as a chicken, international guest wrestlers, a thirty-man Royal Rumble and lots of ritual humiliation of the crowd.

CHOOSE YOUR HERO: FLY TO THE LIGHT!

The Walker on the Telly