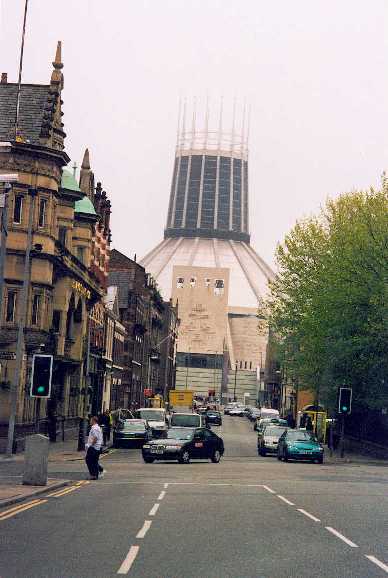 Renowned photographer Mike McCartney is to help launch a photographic competition based on the famous street that links the Anglican and Metropolitan Cathedrals.

The 2010 ‘Cathedral2Cathedral’ photographic competition has the theme ‘Life in Hope,’ and encourages photographers of all ages and abilities to explore life in and around the Hope Street area.

Mike, who will also chair the judging panel, will help launch the competition at 7.30pm on April 23rd during his ‘In Conversation With,’ show at the Anglican Cathedral.

Whilst ‘In Conversation,’ Mike will be talking about his life and what drives his passion for photography and the arts. During the intimate show he will not only be showing slides of his work (including never-before-seen work for a new book in collaboration with Willy Russell), but will also be sharing his favourite music, which will be played acoustically by up-and-coming local musicians. The audience will also be able to quiz Mike on his performance and photography career during a special question and answer session.
“I am chuffed to have been asked to chair the panel of judges for the ‘Cathedral2Cathedral’ competition,” said Mike. “It is wonderful that the competition is being launched at an event where I will be talking about my own passion for photography and how Liverpool has inspired me. Liverpool as a subject offers such variety and richness for photographers – it really is the pool of life.”

Mike McCartney’s photographic career took off in the 1980s when his  photographic book and exhibition ‘Mike Mac’s White and Black’s’, was shown at the Walker Art Gallery, Liverpool and the prestigious Photographers Gallery, London, before touring Britain, Japan and America.

Eleven of his photographs have also been bought for the nation and exhibited at the National Portrait Gallery London and his ‘Mike McCartney’s Liverpool Life’ exhibition was seen in Liverpool, Canada and the Smithsonian Institution in Washington DC. In 2000, Q Magazine chose two of Mike’s images for their ‘Greatest Rock n Roll photographs of All Time'(foreword by David Bowie) Mike also has an interest in screen printing and he took the official photographs for the Live8 concert books.

Eryl Parry, Director of Enterprise for Liverpool’s Anglican Cathedral said, “Last year’s photographic competition, which had the theme ‘My Cathedral’ and was based on the Anglican Cathedral, was a huge success. We had such interest that we have decided to join up with our partners on Hope Street to increase the scope of the competition even further. We are particularly pleased to have someone of Mike McCartney’s standing as a photographer to chair our judging panel and of course to be working with our partners along Hope Street.”

Last year’s competition was won by Zak Grant from Toxteth, whose image was a view of the Cathedral from the back of taxi on its way to Lime Street.

This year, in order to inspire budding photographers before the competition deadline of August 20th, the Anglican Cathedral has organised a range of events. As well as being able to hear Mike McCartney speak about his own photography at the In Conversation With show on April 23rd, from July 26th the Cathedral will host a free exhibition of images of the Hope Street area taken by E. Chambré Hardman and a ‘hands on’ display of vintage camera equipment, courtesy of the National Trust’s Mr Hardman’s Rodney Street Photographic Studio of which Mike is a trustee.

All shortlisted entries will be shown digitally in venues across the Hope Street area. Competition prizes will include hotel stays, theatre tickets and meals, vouchers for photographic equipment and a masterclass with award-winning photographer Martin Birchall.

Tickets for ‘In Conversation With Mike McCartney’ are £15 from the Cathedral Shop, 0151 702 7255 or www.cathedralshop.com

For rules and guidelines on submitting a photograph for the ‘Cathedral2Cathedral’ Photography Competition please see www.liverpoolcathedral.org.uk