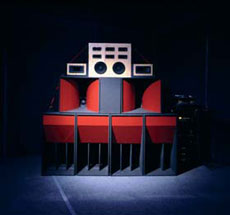 Turner Prize winner Mark Leckey is to give the first of a new series of ‘Tate-Hope’ lectures in January 2010.

Mark, who was born in Birkenhead and went to school in Ellesmere Port, will speak about the influence that growing up in Merseyside has had on his work.

The talk will be held at Liverpool Hope’s Cornerstone campus in the city centre on January 14th. The day after the lecture, Mark will visit the university’s art department and talk to staff and students.

Christoph Grunenberg, Director of Tate Liverpool said: “We are delighted that Mark Leckey is re-launching this partnership that brings the best contemporary artists to Liverpool.

“The influence Mark’s roots in Merseyside have had on his work is profound and this is an exciting opportunity to hear more about how the work of this significant contemporary artist has developed in the place where he is from.”

The event renews the successful partnership between Tate Liverpool and Liverpool Hope University building on joint aims to bring the best contemporary artists to Liverpool.

Alan Whittaker, Head of Visual Arts at Liverpool Hope said: “The revival of the lecture is another example of the increasingly close collaboration between the University and the Tate and we’re thrilled that Mark has agreed to give it.

“He is a local artist with an international reputation and this is a wonderful opportunity for our students to listen and learn from one of the finest talents working in Britain today.”

Leckey follows artists such as Cornelia Parker, Stephen Bayley and the Wilson twins who have previously given the Tate-Hope lecture.

Mark rose to prominence in 1999 with Fiorucci Made Me Hardcore, in which he appropriated pop imagery and music to create a layered and manipulated homage to UK club life from the 1970s to 1990s. Chronicling the experience of successive generations of British youth, the eclectic assemblage includes reference to the hybrid dance culture of the hugely popular northern soul scene of the late 70s and early 80s.

His work combines sculpture, film, sound and performance in soulful and provocative works that comment on modern life and popular culture with wit and originality.

He won the 2008 Turner Prize for his solo exhibitions Industrial Light & Magic at Le Consortium, Dijon, and Resident at Kölnischer Kunstverein, Cologne.

He is currently professor of film studies at Städelschule, Frankfurt am Main and was a founding member of the musical collectives Donateller and Jack too Jack.

The talk will begin at 6.30pm and tickets are available from Tate Liverpool through the online booking facility www.tate.org.uk/tickets or by contacting the Tate Liverpool Box Office on 0151 702 7400.