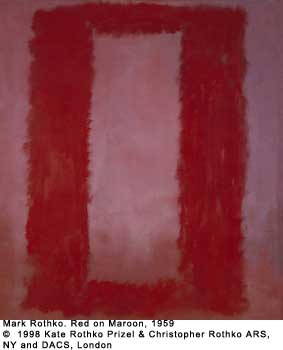 Its a long way off but something to look forward to.

In 1988 Tate Liverpool opened with a memorable display of Mark Rothko’s The Seagram Murals. Over 20 years later the series will make a welcome return to the gallery. From 2 October 2009 – 21 March 2010 Tate Liverpool’s ground floor gallery will be transformed into an emotive display of these nine significant paintings – the walls will be painted grey according to Rothko’s specifications and atmospheric lighting will enhance the dramatic qualities of the works. This display is presented in conjunction with the Tate Collection display DLA Piper Series: This is Sculpture.

In 1958 Mark Rothko was commissioned to paint a series of paintings for the Four Seasons restaurant, in the Seagram Building in New York. Having devoted himself almost exclusively to the commission for eight months, he decided that the fashionable restaurant was an unsuitable place for the contemplation of his art, and the pictures were never installed. Working in his studio, Rothko matched the exact dimensions of the restaurant with a specially constructed scaffold. He painted three different versions of the series, refining his approach each time – the works presented at Tate Liverpool are from the second and third. The Seagram Murals were a significant departure for Rothko. His atmospheric compositions of stacked, floating rectangles were abandoned for a more severe architectural scheme. As the series progressed, his colours shifted from bright and intense hues to a selection of maroon, dark red and black.

In making these paintings Rothko was influenced by the sombre murals of Pompeii and, in particular, by Michelangelo’s Laurentian Library in Florence, with its blind windows and deliberately oppressive atmosphere, both of which he visited on a trip to Italy in the summer of 1959. Rothko commented that Michelangelo “achieved just the kind of feeling I’m after – he makes the viewers feel that they are trapped in a room where all the doors and windows are bricked up.”

The artist presented the paintings to the Tate Gallery in 1968 and 1969, expressing his deep affection for England and for British artists, especially JMW Turner. The original display at the Tate was conceived in collaboration with the artist, resulting in the powerful and concentrated environment that he always envisioned for these paintings. Perceived, as the artist intended, in reduced light and in a compact space, the subtlety of the layered surfaces slowly emerges, revealing the solemn and meditative character of the works.

Block of Ice to be Exhibited in Tatton Park Biennial