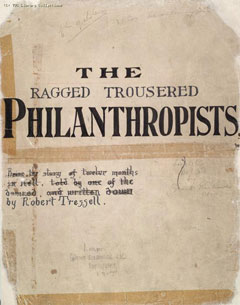 Some very interesting and exciting stuff to look forward to next year. (Artist groups interested in being involved should contact Bryan Biggs at the Bluecoat)

REBELLIONS, controversy and forward-thinking will all be celebrated next year in Liverpool.

Organisations across the city will host a series of events to mark a century of cultural, social and political radicalism in Liverpool.

And the city council will be kicking-off the celebrations by marking the centenary of Robert Tressell’s death – one of the great socialist figures of the twentieth century, who inspired generations with his novel The Ragged Trousered Philanthropists.

Tressell, born Robert Noonan, died in Liverpool on 3 February 1911 when he and his daughter were en-route to Canada.  He was buried in a cemetery in Walton, which is today on the same site as Rice Lane City Farm.

Working with the Bluecoat, Liverpool City Council has commissioned prestigious artist David Jacques, Liverpool Art Prize winner and shortlisted for this year’s Northern Art Prize, to produce artwork which will reflect Tressell’s importance.  David has received critical acclaim for his work around trade union and memorial banners and will draw on twentieth century posters, adverts and press cuttings which focus on industrial struggles.

As part of the anniversary, a banner showcasing the work will be erected on the side of a prominent terrace of listed buildings on Dale Street.  The banner will also help in protecting the external façade of the terrace as well as improving its appearance.

David said: “Tressell is often seen as a rite of passage if you’re in any way involved with politics of a Leftist slant.

“The Ragged Trousered Philanthropists was significant for me because it addressed economics among other things and it did this in an accessible way, by weaving the subject into a story.  For the most part its analysis still stands up and it’s a useful point of reference given the economic crisis we’re living through now.”

Other plans to honour Tressell include a series of special events on the 3 February including a wreath laying at the Tressell plaque located at the former Liverpool Infirmary, a ceremony at his graveside and an evening at the Town Hall where the impact of Tressell will be debated.

Public readings of the book will take place in Dovecot, Walton, Sefton Park and Toxteth libraries, and in March, the John Moores University Roscoe Lecture Series will dedicate a session to the author.

The City of Radicals programme takes place next year as one hundred years ago, in 1911, Liverpool was at the height of its power and influence.  During that year three radical events took place:

* The Liverpool Transport Strike – some historians believe this is the nearest the UK has come to a revolution and was so alarming the government sent a warship to the Mersey.
*The controversial Liver Building opened and was the first to use reinforced concrete in its construction.
*The Bluecoat held a ground-breaking exhibition of paintings by Post-Impressionists, including Picasso and Matisse, showing the work alongside that of local artists.

The official launch of 2011: Year of Radicals will take place in February when the full programme of events will be announced.

Some of next year’s highlights include:

*’One of the Damned’, short play based on the author working on his novel will be performed at the Millennium Centre (Vauxhall) on 27 January and at The Casa (Hope Street) on 1 February
*David Jacques: The Irlam House Bequest is new artwork, produced especially for the Walker Art Gallery celebrates the centenary of the 1911 General Transport Strike.
*Liverpool Working Class Life & Music Festival.
*The Writing on the Wall festival in May will mark the centenary with a series of creative events.
*Liverpool, City of Radicals, a book edited by Professor John Belchem and Bryan Biggs, looking at some radical themes across the century, published by Liverpool University Press.
*Art in Revolution: Liverpool 1911, an exhibition at the Walker Art Gallery recreating the 1911 Post-Impressionist exhibition.
*Exhibition at the Williamson Art Gallery, Birkenhead by Polish émigré Albert Lipczinski, a radical painter in 1911.
*Democratic Promenade, an exhibition at the Bluecoat drawing on the city’s radical heritage seen through the lens of contemporary artists.
*Chapter & Verse literature festival at the Bluecoat, with a radical theme

Chief Executive of the Bluecoat, Alastair Upton, said “Radical ideas have shaped Liverpool’s culture over the past century, and the Bluecoat is delighted to be working with its LARC and other partners to celebrate and explore some of this history, as well as provide an invitation for everyone to join in the City of Radicals year.

“2011 will draw attention to radical achievements but also highlight where the radical is today in the culture of the city and beyond.”

The programme is supported by Liverpool Trade Union Council and the Public Commercial Services Trade Union and a list of events will be announced next year.

Steve Farley NWTUC Chair said: “The Ragged Trousered Philanthropists is a book of huge significance to the trade union movement and it is fitting that its link to the city is celebrated within the context of our proud history of radicalism.

“Our own celebrations of the book as part of the Unions 08 project in 2008 ignited fresh interest in the works and its themes therefore we have been pleased and proud to play a part in the organisation of these events to celebrate Liverpool’s century of radicalism.”

Gideon Conn at the Quarter – Soon