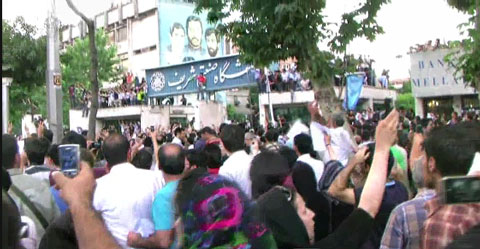 A late addition to the Long Night events – THURSDAY 18 November 2010.

DdB Media and Liverpool-based American artist Deena DeNaro-Bickerstaffe are curating a short programme of Subvertisements and Culture-Jamming actions called Operation Video Tag which will be shown during the Long Night of the Liverpool Biennial on 18th November, 2010.

Culture jamming entails transforming mass media to produce ironic or satirical commentary about itself, using the original medium’s communication method. Many culture jams are simply aimed at exposing questionable political assumptions behind commercial culture so that people can momentarily consider the branded environment in which they live.

In addition to Ms. DeNaro-Bickerstaffe’s film, Reverse the Wave, subvertisements from artists like Viki Eagle, Beto Shwafaty, as well as work from culture jamming veterans such as the Billboard Liberation Front and TradeMark G and the Evolution Control Committee.

From 6pm until midnight, these culture-jamming works will be projected on buildings and facades around Liverpool during the Long Night events scheduled for the Liverpool Biennial on 18th November.   Operation Video Tag will target at least 5 high-profile Biennial locations during the night running it’s culture jamming programme on a short loop, showing each piece several times at each location.

Additionally, Reverse the Wave is being shown in the “ComVideo” exhibition at Apex Art.  The exhibition, which officially launched in New York City on 10 November, can also be viewed online at http://www.apexart.org/comvideo/vote.php People can view each video on the Apex Art site and then vote for their favorite one.  The filmmaker that receives the most votes will receive $2000.

Ms. DeNaro-Bickerstaffe  say she would use the prize money on further “Video Tagging” operations to bring awareness to duplicitous advertising and media literacy.  She is asking people to view the videos here from now until 15th January, vote for her entry, Reversing the Wave,   #142 and pass the info on to as many fiends and colleagues as possible so they can vote.

Artist builds 12 metre submarine for ‘Underwater’ exhibition at the Bluecoat