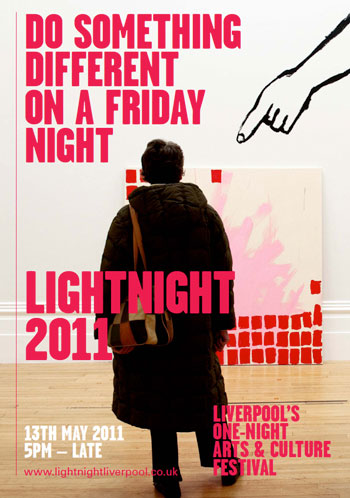 Night owls can look forward to over 50 special events at Liverpool’s annual Light Night festival this May, including the first nocturnal underground tours of the world’s oldest wet dock and launch of a new international photography festival.

A citywide celebration of Liverpool’s world-class arts and culture attractions, which attracted up to 10,000 people last year, visitors of all ages are being invited to follow an exciting trail of events at city centre hot spots and enjoy a ‘Friday night out – with a difference’.

Instead of trawling the city’s legendary pubs and bars visitors are being invited to create a public mural, try Samba drumming, enjoy Tate’s art collection to live music, take a walk down Liverpool’s radical past or explore architectural jewels such as the Town Hall, Anglican Cathedral and Queensway Tunnel.

As one visitor wrote last year: “The best thing was the atmosphere – it was like being on holiday – [a chance for] people like me to be out late – doing something interesting and different rather than a pub or a meal – which is what we usually do when we go out at night.”

·     The launch of Liverpool’s first international photography festival, Look11 with special previews across 15 sites, including The Walker Art Gallery and The Bluecoat

·     The Radical Route walking tour – get an insight into Liverpool’s history as a city of radicalism and protest, as part of Liverpool City of Radicals 2011

·     3D demo’s and workshops at Liverpool Art & Design Academy where you can also help create a public mural with Draw the Line.

·     A musical mela at Hope University with a lively blend of dance and music all around the campus, including Indian arts from Milapfest.

·     Delight your senses at FACT’s Week of Loveliness

·     Walker Art Gallery present photographs by Paul Trevor, life in Everton and Toxteth in the 1970s

Light Night is part of a national campaign called Museums at Night when museums and galleries around the country will stay open late staging event and activities.

Liverpool City Council’s cabinet member for culture and tourism, Councillor Wendy Simon, said: “Light Night has something for everyone with a fantastic mix of arts, music, dance, tours and performance. It’s a celebration of the city’s phenomenal cultural offer and I’m positive on the 13 May, when the venues throw open their doors after hours, Liverpool will be buzzing!”

Ged Gibbons, Chief Executive of City Central BID, which is a co-funder of Light Night 2011, said: ‘’Liverpool has an amazing amount of culture and history to offer visitors but Light Night opens the doors to venues that many people take for granted and gives them a special twist. Friday night is always a good night out in Liverpool but on May 13 people can expect something very different. It should be great fun – for everyone.’’

The full programme for Light Night 2011 will be out for FREE from 25 April 2011 – request one by joining the mailing list at www.culture.org.uk

Late Opening at Lady Lever in Aid of Hillsborough Memorial

Lutyen’s Cathedral That Never Was

Fixing a Hole in the Ocean