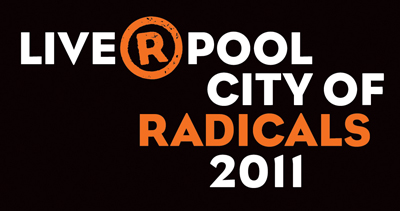 Thanks to LARC for the following…

Much of Liverpool: City of Radicals is still in the planning stages so please check with the venue or organisers beforehand as details may change.

The new City of Radicals website www.cityofradicals.co.uk is coming soon but until then, here is a line up of events.

Nerve’s 2011 calendar, with images relating to 1911 was launched at the Bluecoat in December. Copies from News from Nowhere. Nerve magazine to continue with related events throughout the year. Web: www.catalystmedia.org.uk/

Date/s: 1st – 31st May
Writing on the Wall
The WOW festival has a long history supporting radical writing, from the local to the international, so is well placed to contribute to the 2011 events
Venue: Various
Organiser: Writing on the Wall
Web: www.writingonthewall.org.uk

Date/s: 24th June – 25th Sept
Art in Revolution: Liverpool 1911
Restaging of the 1911 Post-Impressionist exhibition when Picasso, Matisse, Cézanne and others exhibited alongside Liverpool artists at the Bluecoat at the invitation of the Sandon Studios Society
Venue: The Walker
Organiser: The Walker
Web: www.liverpoolmuseums.org.uk/walker/

Date/s: 30th September – 27th November
Democratic Promenade
This exhibition, curated specially for Liverpool City of Radicals, will draw on various ‘radical’ moments in Liverpool and Labour history whilst looking more broadly at ideas around democracy. Artists in discussion with the Bluecoat include David Jacques, Oliver Walker, Dave Sinclair and there will also be fascinating archive material.
Venue: The Bluecoat
Organiser: The Bluecoat
Web: www.thebluecoat.org.uk/

Other venues and organisations in the city, including the Philharmonic, Africa Oye, Unity Theatre, Liverpool Irish Festival, Collective Encounters, the Duncan Society, Hope University, News from Nowhere bookshop, Liverpool Parks and the Primary Care Trust, are also planning programmes – to be announced.

Frank Green at the Williamson