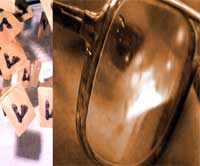 Gaynor Evelyn Sweeney and Tony Knox, both Liverpool based artists, are part of an upcoming exhibition in Manchester called the Collective in Wellington House, Pollard Street, Ancoats, Manchester, under the Collective. The concept of this exhibition was founded by Irene Rukerebuka of Tilfeldig Productions from Manchester.

The Collective are a group of eight artists researched and selected by Irene Rukerebuka from diverse professional and creative backgrounds and practices. They were each set the brief to respond to the building where the exhibition is held, which was primarily a Cotton Mill in Manchester. The artists have produced a range of art, installations and performances to this and opens on Thursday 26 January 2006 between 6.00 pm – 9.00 pm. The exhibition is only open for seven days, 27 January – 01 February 2006.

The art created by Sweeney is an installation formed by cotton and polythene. Within this enclosure there will be a live performance. The structure is to relate the history and life behind the mill in the foundations and edifice of this building. The installation is born from a white, sterile, metal box, layered by cotton and plastic. This outstretched to form a sculptural synergy between spatiality of the building in it’s contemporary and historical context. This fusion between cultural object in this installation and artefact of the building re-animated with a heart pulsating in the centre of the labyrinth and white box. A live performance relative between the spatiality and temporality of the building and art created

Knox has produced a short film. This shows him surrounded by mirrors in a woodland. He cuts off his beard revealing physical similarities to his father and him. He then dresses in his father’s clothes, watch and starts to cut his long hair, transforming himself into the persona of his father who passed away nineteenth months earlier to the day this performance was shot. The work will be presented as a digital projection onto the hung mirrors that previously laid in the woods for five months. This project has been supported by the University of Central Lancaster providing the hire of the projector. 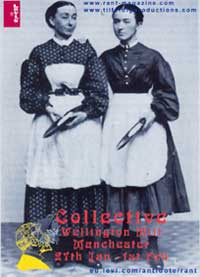 Rukerebuka has worked with Eva Aftab to realise the final stages of this extraordinary exhibition. As well as this project. Rukerebuka also is founder and editor of Rant Magazine and Tilfeldig Productions. Rant has an international distribution to various arts and cultural outlets. This coincides with the national event of the British Art Show 2006.

The Bluecoat Announces Exhibitions for 2010

May Exhibition at Lauries, Birkenhead

News From Liverpool Academy of Arts