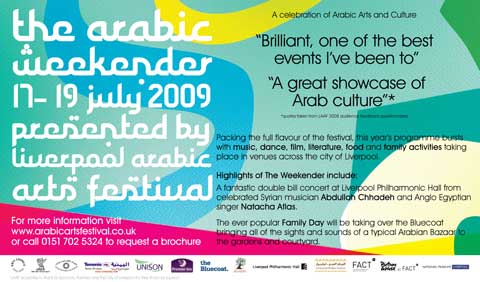 Launching the nation’s most significant celebration of Arab culture

The Liverpool Arabic Arts Festival is delighted to announce The Arabic Weekender 17-19 July 2009, a major three day event bursting with the sights, sounds and flavours of the Arab world.

Now in its eighth year, the Festival has become a hugely popular fixture at the heart of the city’s cultural calendar and remains the only one of its kind in the UK.

For 2009 The Arabic Weekender features a host of activity from across the Arab world in the fields of visual arts, literature, dance, film, food and music including a special performance from Palestinian hip hop group Ramallah Underground.

As ever the events will be staged across multiple venues including the Bluecoat, Liverpool Philharmonic Hall, FACT, St George’s Hall and World Museum Liverpool.

On Friday 17 The Arabic Weekender will feature ‘Voyage to Arabia’, a ride along the Mersey from the Liver buildings led by elders from the Arabic community with music and dance. This event is accompanied by an exhibition of 30 individually painted wooden dhow boats at Liverpool Playhouse.

The centrepiece of The Arabic Weekender is the Family Day on July 18 taking place throughout the Bluecoat building and gardens. This is a multi art form event featuring live music, dance, storytelling, workshops, stalls and food for Arab and non Arab audiences of all ages.

The Family Day is headlined by El Andaluz, leading exponents of classical Arabic and Andalusian music. Also present will be Shafeek, a master of the Egyptian whirling dervish, and rising star Cheb Nacim performing traditional Rai spiced with flamenco, salsa and rumba.

Promising to be one of the Weekender’s highlights, a fantastic double bill concert at Liverpool Philharmonic Hall (Saturday 18) features full sets from celebrated Syrian musician, Abdullah Chhadeh and Anglo-Egyptian singer Natacha Atlas.
Since its launch in 2002 Liverpool Arabic Arts Festival has grown rapidly in size and confidence, audience expectation and ambition. To capitalise on its successful foundation, and to maximise levels of funding, the organisation is busy developing plans to re-launch in July 2010 as Britain’s first fully independent Arabic Arts Festival. Key funding for LAAF 2009-2011 has been sourced from Liverpool City Council (Liverpool Arts and Cultural Investment Programme) and Arts Council England North West (Grants for the Arts Programme).

Liverpool Arabic Arts Festival has also been shortlisted for the Arab-British Culture and Society Award 2009, a prestigious honour organised by the Arab-British Centre. The Award recognises outstanding contributions to the British public’s understanding of the life, society and culture of the Arab people.

James Cummins to Exhibit in Copenhagen