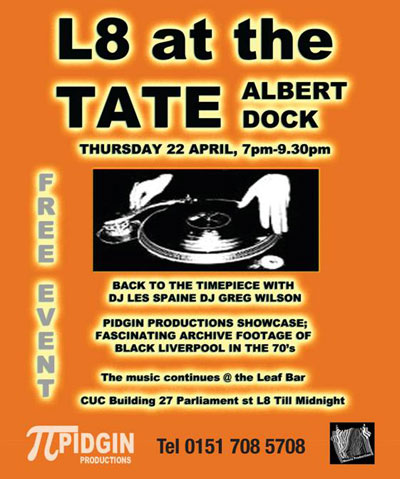 THURSDAY 22 April 2010, 18.00–21.00 at Tate Liverpool
L8 at the Tate – Back to The Timepiece. 1970s Club Night, Fancy dress. An event by and for adults with a learning disability and anyone who loves 70’s disco. Tate Liverpool gets Night Fever: Step back in time and re-live the 1970s with Magic Mirror Ball. FANCY DRESS ENCOURAGED.

Wear your afros, stack-heeled boots and 70s flares and get in the mood to party for an evening of music, film, debate and reminiscence. Join internationally renowned local DJ Greg Wilson, and Les Spaine, who inspired him during in the 70s, to explore the little told story of the development of the thriving black music scene in Liverpool back then. As part of the evening, Pidgin Productions, who curated the Afro BIA exhibition at the CUC in Liverpool in October 2009, will showcase fascinating film footage and archival material from the Black Liverpool music scene in this hugely influential era.

On Merseyside people experienced an era that brought fourth some of the greatest black music ever committed to vinyl, with truly legendary artists, like Marvin Gaye, Stevie Wonder, Curtis Mayfield and Isaac Hayes releasing their most acclaimed work. Now classic Funk acts like Parliament, Ohio Players, Earth Wind & Fire, Kool & The Gang, Brass Construction and B.T Express, with the Godfather, James Brown, were at the vanguard of a movement that would be fundamental to the evolution of black music and dance culture.

Do you have a story to tell about black music from the 60’s, 70s and 80s? Did you go to The Timepiece, The Pun, The Mardi Gras or The Sink? Did you tune in to ‘Keep On Truckin’’ on BBC Radio Merseyside? Have you been influenced by this significant historical era in music? If so, become a fan of Black Music on Merseyside on Facebook to join the debate online and share your stories, photos and videos relating to this largely obscured part of Merseyside’s music past, and contribute to the debate on the night.

After the conversation, a rare chance to hear Les Spaine as he takes to the decks for one night only to relive the days spent at The Timepiece and The Pun. In a specially curated mix of unique footage, Pidgin Productions will sync key moments, memories and photos to Les Spaine’s DJ set for an unforgettable celebration of Liverpool’s black music scene.

Also on view throughout the evening will be the infamous record sleeves from the 70s and 80s collected from the local community, alongside striking afro silhouettes, music, and projections of photos and film from the era.

After the event the 70s groove continues with a party at LEAF Tea Shop & Bar, 27 Parliament Street, L8 5RN from 21.15 until midnight.

Toxteth-based DJ Les Spaine was one of the most important British club DJs of the 70s and made a significant contribution to the black music scene in the UK. Les was resident DJ at The Pun and then The Timepiece before leaving the city to take up a position for Motown Records.

The legendary electro-funk DJ Greg Wilson began DJiing in 1975 and is regarded as one of the most important figures on the UK dance scene. He enjoyed popular residencies in the early eighties at Wigan Pier and Manchester’s influential Legend and Haçienda clubs. Greg was instrumental in breaking the new electronic, post-disco records coming out of New York, a sound he has dubbed ‘Electro-Funk’.

Liverpool-based Pidgin Production company have been documenting the black community for over ten years and more, and have built up and secured an archive both of stills and moving image   This material has been shown  at events, festival, education, master classes. They have been involved in profiling Liverpool Black music scene in numerous film &documentaries for    broadcasters.  Each year they put together something unique and special for Black Screen festival, and Black History month and continue to ensure that cultural diversity is at the forefront  on the multi media platform .

This event is supported by Tate Liverpool Members.

This event is related to the Afro Modern: Journeys through the Black Atlantic exhibition.