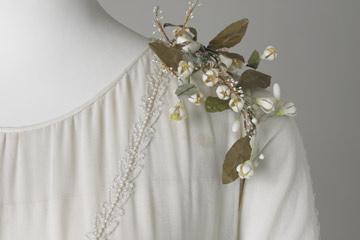 Over a century of Liverpool weddings

This summer, during the height of the UK wedding season, Sudley House opens an exhibition of wedding outfits that reveals the changing face of marriage on Merseyside over the last 150 years.

From an elegant 19th century white silk taffeta wedding dress to the sharp suits of a 21st century civil partnership, Hitched: Wedding Clothes and Customs explores how, despite significant changes in society, marriage continues to play an important role in many people’s lives.

The exhibition gives an insight into social changes in Liverpool with information on each garment revealing details about the owner and where they were married.

Every cultural group around the world has its own dress code and customs linked to the wedding ceremony. This exhibition looks at wedding dress and customs of the different communities in Liverpool, including the Jewish, Chinese and Travelling community.

The exhibition features around 20 dresses and accessories. Highlights include:

Alongside the outfits and accessories are photographs and ephemera revealing the many and varied traditions of weddings from food, transport, venue and even the stag and hen “dos”.

Little known superstitions and beliefs are uncovered, such as why the wedding ring is always worn on the third finger of the left hand, or why the meal following the ceremony is known as the wedding breakfast, no matter what time of the day it is eaten.

Curator of costume and textiles, Pauline Rushton says: “Despite the number of people getting married actually falling, the average cost of weddings continues to rise and now stands at almost £20,000. This tells us something about the importance still placed on an institution which has been part of our society for thousands of years.”

Hitched: Wedding Clothes and Customs  brings together items from National Museums Liverpool’s own costume collection and private loans to build up a picture of weddings from Victorian times to the present day.

Hitched: Wedding Clothes and Customs will tour to other venues in the region during 2011.

A publication which accompanies the exhibition will be available.

China Live in Liverpool this Saturday