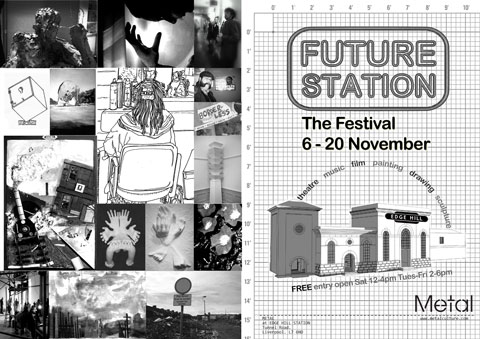 There is an excellent exhibition at Metal now as part of Future Station and this Saturday, 13 November 2010 there is an afternoon / evening of events including the temporary re-formation of the Edge Hill BR Brass Band!

During a day long festival of art, music and theatre led by Metal’s Future Station group on Saturday 13th November, audiences will be greeted with a one-off performance from members of the old Edge Hill BR brass band with members of the current Formby Brass Band.  The evening of festivities starts at 4pm when the band will march down the cobbled approach to the station.

Other activities on the day include a cabaret-style performance of old railway folk songs, devised by Liverpool theatre group the Suitcase Ensemble, a Ray Charles tribute band Ray of Charles and a performance from one of Liverpool’s most alternative rock bands Lovecraft, as well as an exhibition with contributions from members of the Future Station group and an interactive multimedia performance ‘The Ganzfeld Machine’ from Ailie Rutherford and Bob Moyler, the artists behind a new science fiction theatre for Liverpool, Bonk Street, which premiered ‘From Beyond Iron Mountain’ earlier this year.

The festival day is free. Timings are as follows:

4pm     Brass band march
5pm     Film screening of ‘Pam’s Alterations’ by Paul Fred Kelly with a live score by Rebecca Joy Sharp.  A film taking a thoughtful last look at residential Wavertree before its demolition.
6pm     The Ganzfeld Machine, by Ailie Rutherford and Bob Moyler
7pm     A Ray of Charles
8pm     Lovecraft
9pm     The Suitcase Ensemble: Look at Us Now

The Future Station group is an open and inclusive network of individuals who meet every month at the station to develop ideas for the spaces, work with Metal’s artists- in-residence, and to create and encourage collaboration between the group.

This Saturday’s celebrations are a highlight of the two week festival that brings together ideas from across all artistic disciplines, an eclectic mix of theatre, live music, film, lively debate, painting, drawing and sculpture.

The exhibition featuring group members’ work will continue until Saturday 20th November and will be open Tues-Fri 2-6pm and Saturday 12-4pm.
On Thursday 18th November for the Long Night a live action multimedia installation ‘Border- Less’ will be open until 9pm.

The festival is part of the Liverpool Biennial Independents strand (www.independentsbiennial.org).

Liverpool Cityscape Complete – On Show From May 24

Dot-Art Exhibition at the Philharmonic