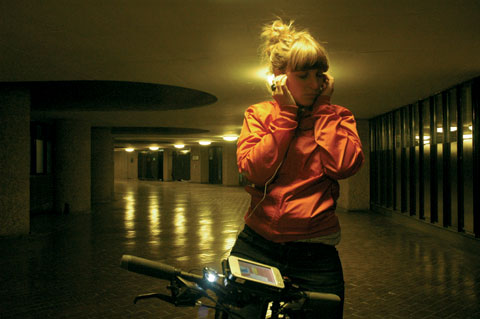 Other road users and pedestrians beware!

Get on your bike: FACT presents a work for cyclists by acclaimed UK artists Blast Theory

Based on an original version of Rider Spoke, which premiered with a sold out season at the Barbican in October 2007, Rider Spoke Liverpool invites the audience to cycle through the streets of Liverpool seeking out unusual and secretive hiding spots to reveal their innermost thoughts.

Audience members collect a bike from the FACT Atrium, then with a small computer console mounted on the handlebars they begin cycling around the city. Using the touchscreen and ear-piece, the rider listens to questions and are asked to find a ‘hiding-place’ to make a response. Using wi-fi technology, the answers are ‘hidden’ in that location and as the riders cycle through the city they can see hiding spots of other riders and listen to their responses.

The interface employs imagery drawn from Mexican votive painting, sailor tattoos and heraldry: swallows flutter across the screen to show available hiding places, prefab houses indicate places where others have hidden. Rider Spoke Liverpool blurs the distinction between theatre and game play and encourages participants to become coauthors of the piece.

Four times BAFTA nominated, Brighton-based Blast Theory is one of the most adventurous companies experimenting with performance in the digital age. The company is led by artists Matt Adams, Ju Row Farr and Nick Tandavanitj and uses interactive media to create games, installations and performances.

Rider Spoke Liverpool was developed by local artists Lorena Rivero de Beer and Venya Krutikov who worked with Blast Theory, to develop their own set of questions inspired by the streets and sites of Liverpool.

Rider Spoke Liverpool has been developed with the support of ICDC at John Moores University and FACT. Rider Spoke was developed in collaboration with the Mixed Reality Lab at University of Nottingham, Sony Net Services and the Fraunhofer Institute as part of the European research project IPerG (Integrated Project on Pervasive Gaming) and is
sponsored by Trek. Blast Theory is supported by Arts Council England South East.

Space Invaders: Art and the Computer Game Environment is part of a season of gaming at FACT. A group exhibition that brings art and gaming cultures together, from retro textbased role-playing games, to the detailed city maps found in the latest Grand Theft Auto, Space Invaders draws on these sources of artistic inspiration and explores the increasingly blurred boundaries between video-game spaces and real spaces.
www.blasttheory.co.uk
www.fact.co.uk

The Bluecoat Announces Exhibitions for 2010