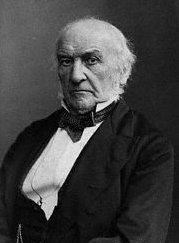 Liverpool is to celebrate the bicentenary of the birth of William Gladstone, four-time British Prime Minister, with a special exhibition celebrating his life.

The FREE exhibition, to launch on Tuesday, December 29th – 200 years exactly to the day of his birth – will be held at St George’s Hall in Liverpool, less than a mile from his birthplace at 62 Rodney Street.

The three month long exhibition, which ends on March 27 2010, will be situated in the Gladstone Gallery in the Grade 1 listed hall and will feature items such as records, diaries and books from his career, Gladstone merchandise such as pottery and ceramics, newspaper cuttings of the day and a bust donated by John Moores University.

As part for the celebrations, launched by Liverpool’s Deputy Lord Mayor, Councillor Hazel Williams, a series of talks will be held on the day by local historians exploring the different stages of his life from Gladstone’s childhood in Liverpool, his political career to the world in which he operated.

One of the outstanding statesmen of the 19th century, Gladstone was instrumental in shaping modern-day democracy in Britain from reforming voting rights and meritocracy in the army, to free education and advocating Irish Home Rule.

An MP for more than 50 years, the son of a Scottish merchant also served as Chancellor of the Exchequer where he passed a bill cutting publishing duties paving the way for cheaper newspapers and more publications.

Cited by Winston Churchill, who also represented both the Liberal and Conservative Party, as one of his greatest inspirations, Gladstone was equally famous for his frosty relationship with Queen Victoria and his political rivalry with Benjamin Disraeli, who like Gladstone is also honoured with a statue at St George’s Hall.

In 1895, at the age of 85, Gladstone bequeathed £40,000 (equivalent to approximately £3.31 million today) and much of his library to found St Deiniol’s Library in Hawarden, Wales, the only residential library in Britain. Despite his advanced age, he himself hauled most of his 32,000 books a quarter of a mile to their new home, using his wheelbarrow.

In 1896, in his last noteworthy speech, he denounced Armenian massacres by Ottomans in a talk delivered at Liverpool to 7,000 people at the now-gone Henglers Circus near West Derby Road.

Gladstone died on 19 May 1898 at Hawarden Castle, Hawarden, Flintshire aged 88. His coffin was transported on the London Underground before his state funeral at Westminster Abbey, at which the Prince of Wales (the future Edward VII) and the Duke of York (the future George V) acted as pallbearers.

Liverpool street fashion at the Walker

Art From The Square – Opens at Calderstones Today

e-space lab at (out of) Bluecoat This Weekend