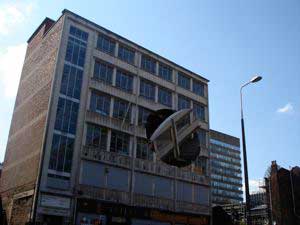 The Liverpool Biennial are throwing Turning the Place Over a birthday party!

You may have seen this amazing piece of public artwork feature on Channel 4’s Big Art series recently, presented as an icon of UK public art.

Despite initially being a temporary public artwork until 2008, Richard Wilson’s Turning the Place Over is now in it’s 2nd year. To celebrate this, Liverpool Biennial are throwing it a birthday party. Launched in 2007 to international acclaim, this radical intervention into architecture is now an established icon of Liverpool’s extensive public art offer.

Artist Richard Wilson will be speaking at the celebratory birthday event about his reaction to how well the artwork has been received over the past 2 years. As well as this, David’s Cakes of Distinction, located in Crosby, are producing a 4ft x 4ft cake of the artwork, including a rotating ovoid!

Also offering tours of Turning the Place Over, allowing the public to view the artwork from the inside of the building.

The event will take place on Friday 19 June 2009, 5.00pm onwards at Mercury Court, Tithebarn Street. Due to limited capacity, attendance will be based on a first come, first served basis. If you would like to attend, please RSVP to http://blogs.biennial.com/rsvp

Darwin and the Beagle