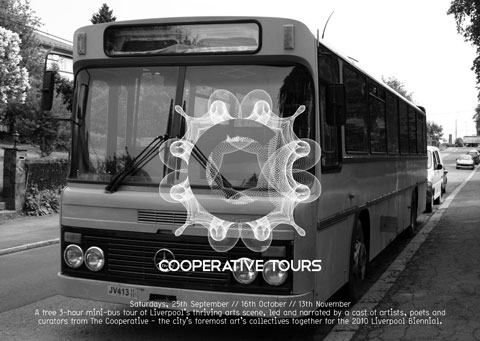 A free 3-hour mini-bus tour of Liverpool’s thriving arts scene, led and narrated by a cast of artists, poets and curators from The Cooperative – the city’s foremost art’s collectives together for the 2010 Liverpool Biennial.

This unique tour to celebrate the coming together of these prolific arts collectives will take in studios and galleries at The Royal Standard, Arena Studios and Galleries, The Lost Soul and Stranger Service Station and Red Wire – where you will be greated by exhibiting artists and curators and shown behind the scenes.

Exhibitions included in this tour include:

Neither Nor at Arena Gallery
with work by Maggie Ayliffe, Caroline Cleary, Brendan Fletcher, Simon Harris and Alister Payne

Red Wire presents: Art in the Pub
The Lion Tavern, Moorfields Street
A collection of Red Wire’s latest work in one of Liverpool’s finest pubs

Hierarchies of Allegiance
at The Royal Standard
Christian Newby, Jonathan Baldock, Pil & Galia Kollectiv
A group exhibition that brings together U.K based artists whose work encompasses film, performance, drawing and installation. The works in Hierarchies of Allegiance share a rich aesthetic that references the uncanny, the darkly humourous and the melancholic.

And, at The Cooperative:
new work by Nicki McCubbing
and a art-book in production by Emily Speed

Elements of Mercy’s Audioguide tour performed live onsite at a variety of locations – featuring reviews of conceptual artworks in the public sphere, by some of the UK’s foremost poets, including Luke Kennard, Ross Sutherland and Jack Underwood.

And beer and coffee at popular artistic spots.

On the Big Screen – Beneath A Cloudless Sky

Half Term Fun at Tate Liverpool