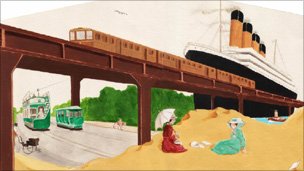 Work has begun on transforming a Sefton landmark into a work of art.

Waterloo artist Kathryn Wilson has been commissioned to create a local history mural on the container sheds at Crosby Coastal Park.

The mural will feature images reflecting life in Waterloo and Crosby in the early 1900s.

Scenes will include the Overhead Railway, the Five Lamps in Crosby and the Titanic, which was captained by Waterloo resident Edward John Smith.

Ms Wilson said: “We’ve recreated scenes from photographs from the time, including women relaxing on Waterloo beach and the bathing machine which they would have used to change into their swimming costumes.”

“I’ve lived here all my life and I’m really proud to be able to contribute to the project,” she added.

“I’ve designed it so that it is left open at the side so we can carry it on to the the next time period,” she said.

“Hopefully we can carry it on through the ages to contemporary times and include the wind turbines.

“I’d like to involve local schools and community groups through workshops so we can use their designs in the mural.”

Kathryn graduated with a degree in Graphic Art from Liverpool John Moores University in 2006 and has worked on illustration commissions, but this is the first on this scale.

“It’s amazing to be working on a piece of art which will be seen by so many people,” she added.

“It will bring more colour into the area and its fantastic because its right by the Gormley statues which attract so many visitors here.”

The mural is expected to be completed in July 2011.

Dreamspace is Coming to Liverpool

The Walker on the Telly