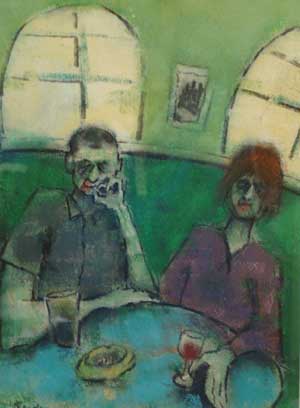 A lot of really good works being auctioned tomorrow – see you there – pick up a bargain or two.
You can see a preview on Arena’s website

Featuring the enimatic Paul O’Keeffe as autioneer, the Arena Auction is celebrating its 5th year with great opportunities to bid for locally produced art at affordable prices. All profits will be channelled back into the Arena Charity to support our ongoing development programme which concentrates on providing affordable studio spaces and promoting excellence in the arts.

As well as showcasing over 25 Arena members work we are also inviting submissions from artists throughout Merseyside, including other prominent studios groups such as Hub artists and The Bridewell.

Members of Arena Art & Design Association have made an ongoing contribution to the cultural life of the city in design, music, public art, painting, sculpture and photography for twenty five years with 2009 being Arena’s twenty fifth anniversary.

Artwork of the Day – The Last Muster

Artwork of the Day – Pablo Picasso

Artwork of the Day – Love Tormenting the Soul

Artwork of the Day – Jenny Dunlop

Artwork of the Day – Pauline Keaney

Artwork of the Day – Anthony Smith