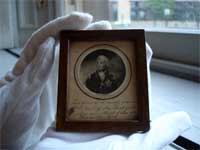 The Trafalgar Festival
The year 2005 sees the 200th anniversary of the Battle of Trafalgar, Britain’s greatest naval victory. On 21 October 1805 the British navy, led by Admiral Lord Nelson, defeated the forces of the French commander Napoleon Bonaparte in a battle which established Britain’s supremacy at sea and freed the country from fear of invasion by Napoleon’s armies. Nelson was killed, but died knowing victory was his.
Commemorating ‘naval victories’ is not my thing at all but I was interested this morning to catch a glimpse of this tiny framed etching of Lord Nelson before it was put into a glass cabinet to be displayed along with other rare items alongside the two ‘Death of Nelson’ paintings in the Walker Art Gallery (until end October).
The etching itself is nothing special but its claimed that the frame is made of wood from the deck of HMS Victory and was given to the gallery in 1892.
Link.
Also some of the original sketches for the West and Maclise paintings are on show. Link
Lots of related things to see at the Maritime Museum in an exhibition entitled Age of Nelson until Jan 13th 2006.

On the Big Screen – Beneath A Cloudless Sky