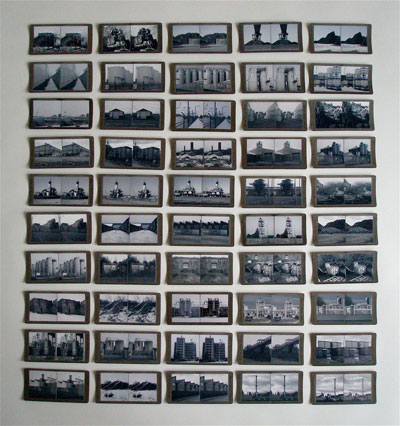 David Jacques is the winner of this year’s Liverpool Art Prize, the image here shows part of his installation at Metal.  The exhibition at METAL at Edge Hill Station ends on Saturday 10 July 2010

North Canada – English Electric
On display is a series of stereoscopic views taken at two locations in Liverpool; the North Canada dock and the former Kirkby Industrial Estate (inclusive of factories such as the English Electric). They function as a ‘concocted archive’, ordered and arranged here into two groups; the dockland is shown on the left, and the industrial estate on the right. The depicted scenes are a substitute to the exotic views that would have originally populated the collection, though the titles of the originals are still evidenced on the mounts.

The audio narrative playing on the headphones concerns a fictional character – an ex-worker who habitually returns to the sites of his previous employment to take these photographs. As he is being questioned for trespassing onto the now closed-off areas, a female voice intervenes. The voice represents a mythological ‘possessing spirit’ who engages us with her ruminations on the subject of Stereoscopy.

The stereoscopic viewer positioned within the installation is available for you to take in the 3D-like effects offered up by this once popular parlour-room activity.

Artwork of the Week – Camille Pissarro